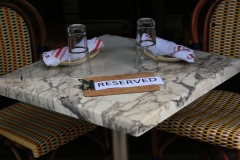 Empty tables stand at a restaurant in midtown on August 03, 2021 in New York. – Mayor Bill de Blasio has just announced “first in the nation” vaccine requirements. (Photo by KENA BETANCUR/AFP via Getty Images)

(CNSNews.com) – New York City Mayor Bill de Blasio announced recently that people will need to show proof of vaccination to enjoy indoor activities like dining in restaurants, going to the gym, and enjoying indoor entertainment like plays, a decision that Rep. Elise Stefanik (R-N.Y.) said Sunday made the city “ground zero” for the chipping away of civil liberties.

“Well, first of all, every American should be outraged. We’re seeing the chipping away of our civil liberties across the country, and New York City, unfortunately, is ground zero for this. Now our restaurant owners are becoming law enforcement officers and having to make the tough decisions, and individuals are coming in with vaccine cards,” Stefanik said.

“Some of them are counterfeit cards. This is not the role of our restaurants. We also should not have policies that segregate those who have been vaccinated or not vaccinated, and the other group of constituents I’m hearing from, Maria, is concerned parents, this discussion about getting back to school in person,” the congresswoman said.

“We all want to make sure our kids get back to school in person, but there’s already discussions about a mask mandate, which is not based upon science. We know that our kids, so, so few are affected by COVID. So there are concerns. And, unfortunately, I think this is the overall politicization of the CDC,” she said.

On the midterm elections, Stefanik said Republicans need to do everything they can “to ensure free and fair elections.”

“That means passing election integrity and election security laws at the state level, and I think it’s the height of hypocrisy when you have the Texas state Democrats traveling, becoming super-spreaders of COVID, and they’re traveling in opposition to a commonsense election security bill that would ensure secure integrity of elections in the state of Texas,” she said.

“So, we need to make sure that we’re doing this in all states and do everything we can to fight back against the universal mail ballots, where there’s no signature verification, where there’s no voter I.D. So I am concerned, Maria. This is why Republicans need to continue to speak out,” the congresswoman said.

Host Maria Bartiromo pointed out that the chair of the Democrat Congressional Campaign Committee said in a closed-door meeting that if midterms were held today, the Democrats would lose the majority because they can’t win on policy.

“Well, he’s exactly right. They are going to lose the majority, whether it’s today or next November. Look at the Biden border crisis. Look at the inflation crisis across the country. Look at the unraveling of our civil liberties, the attacks on our constitutional liberties. The American people know that this is not the right direction. We’re moving in a far left socialist direction,” Stefanik said.

“We need to focus on economic growth, on reopening the economy safely, on ensuring kids get back to school, and commonsense policies, which is not what we’re seeing from Joe Biden, Nancy Pelosi and Chuck Schumer,” she said.