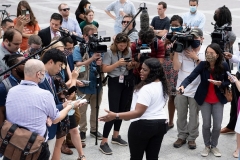 Rep. Cori Bush (D-Mo.) speaks to the press on August 3 about her protest aimed at continuing the eviction moratorium. (Photo by BRENDAN SMIALOWSKI/AFP via Getty Images)

(CNSNews.com) – Rep. Cori Bush, a leftist Democrat from Missouri, described herself on Sunday as a “politivist,” her word for an activist who legislates. She also used the word “radicalized” to describe her children and herself.

Bush recently made headlines for sleeping on the steps of the U.S. Capitol — a protest designed to force an extension of the federal eviction moratorium, even though Supreme Court Justice Brett Kavanaugh said the Executive Branch exceeded its authority in declaring the moratorium in the first place.

Dana Bash, host of CNN’s “State of the Union,” asked Bush on Sunday what her adult children think of her efforts:

“To them, it’s like, this is what mom does. Mom — you know, mom fights for everyone,” Bush said:

And they have seen me do this, whether sleeping out on the street to help in my own community to raise awareness to what’s happening to our unhoused community members, to fighting for justice for Michael Brown, who — the anniversary of his death is tomorrow.

Bush told Bash she sees herself as both an “activist” and a “legislator,” or a “politivist.”

All of that is wonderful. You need that. But the activist side of me, that advocate, is the one that remembers what it was like to be in positions where I felt overlooked and neglected and unheard. And so many others in our communities — I’m a nurse, so I am always advocating. That’s who — that’s what we do.

Bush said as soon as the Biden administration issued a new 60-day eviction moratorium, she rushed back to St. Louis “to get the money out” before anticipated legal challenges intrude.

“We have to do the work to make sure that our states and our local governments are able to release this money, get this money out into the hands of the people who need it the most. So we’re telling tenants, we’re telling — we’re telling landlords to go online or show up at the clinics that are happening around the country and get and apply for this money.”

Bush said she’s “still fighting to save black lives” and to get “justice” for Michael Brown and other black men who have tangled with police. She refused to back off her message that “defunding the police has to happen,” as she said last week, and her simultaneous comment that she has a right to her own security:

So, I don’t believe — as far as my — as far as my colleagues, I absolutely empathize. I empathize. But you know what? The same thing that the Republicans will do, which is figure out how to work with this on the comms (communications) spaces, that’s what we have to do.

So, when we’re adding more money to the police, but we’re still dying. So, something has to change.

Bush said Democrats “have to work on what we want to say, what is our message, but then we also have to understand that we have to save lives, too. St. Louis can’t keep being put on the back burner. And I’m here to stand up for my community.”