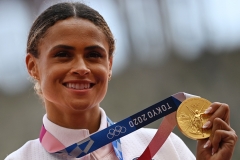 At the Tokyo Olympics last week, Sydney McLaughlin, a 21-year old from New Jersey, won the Gold Medal in 400-meter hurdles with a world record-setting time of 51.46.

“What [an] honor it is to be able to represent not only my country, but also the kingdom of God,” McLaughlin said on Instagram following her victory. “What I have in Christ is far greater than what I have or don’t have in life.”

In Tokyo on Wednesday, July 28th, McLaughlin broke her own world record for 400-meter hurdles of 51.9 that she set last month. Her Olympic victory made her the youngest medalist in this event’s history.  USA Today described McLaughlin and teammate Dalilah Muhammad, who finished second, as “not just the two fastest women in the 400-meter hurdles field, but also the two fastest in the history of the event.”

“Records come and go. The glory of God is eternal,” McLaughlin wrote in another Instagram post, commenting on her Olympic achievement:

“I no longer run for self recognition, but to reflect His perfect will that is already set in stone. I don’t deserve anything. But by grace, through faith, Jesus has given me everything. Records come and go. The glory of God is eternal. Thank you Father.”

In a follow-up post, McLaughlin said she felt honored to have represented both God and country at the Olympics:

“Let me start off by saying, what [an] honor it is to be able to represent not only my country, but also the kingdom of God. . . . His will is PERFECT. And He has prepared me for a moment such as this. That I may use the gifts He has given me to point all the attention back to Him.”

Setting records is nothing new for McLaughlin. When she graduated from Union Catholic High School in 2017, McLaughlin held 13 national titles, had set seven state and four national records, was undefeated – and had even competed in the Olympics, the school reports on its website:

“McLaughlin finished her high school career with 13 national titles (7 individual/6 on relays), a state record tying 11 N.J. Meet of Champions titles, 7 state records, four national records, one World Junior record, and became the only athlete to ever be named the Gatorade National Athlete of the Year two straight years (2016-17).”

McLaughlin’s faith in God helped her deal with the stress of the Olympics by changing her perspective on pressure, USA Today reports:

McLaughlin said her faith in God has grown in recent years, and helped change her perspective on pressure. She’s described it as “an illusion.”

She explains “It’s a weight that you put on yourself, that doesn’t really exist,” she said. “It’s the fear of something that hasn’t happened yet, in your mind, that you’re assuming has already happened. So it’s really just making sure that your thoughts are positive and what you want them to be in order to make them happen in reality.”

McLaughlin also distanced herself from social media in order “to focus on what was important,” according to Fox Sports.