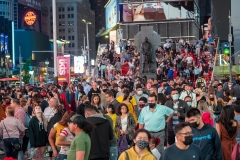 Large crowds of people with and without masks fill Times Square on June 12, 2021 in New York City. (Photo by Alexi Rosenfeld/Getty Images)

(CNSNews.com) – “If you are vaccinated, you are very well protected against getting infected,” Dr. Anthony Fauci said on Sunday. “Since no vaccine is 100 percent protective, there will be what we call breakthrough infections. That’s the bad news,” he added.

“Do you have enough data as a scientist to know for sure what these breakthrough cases are doing to people?” Chuck Todd, host of NBC’s “Meet the Press,” asked Fauci:

“Well, previously we didn’t. We have to admit that,” Fauci said:

That early on, it was said, to just give testing for people who have had contact with people who were infected, who were symptomatic. Now it’s very clear you got to go beyond that, Chuck.

Because we know now from experience here and in other countries that you will have people who are asymptomatic, who get into contact with an asymptomatic person who is infected, and you know that there will be more infections that otherwise would have gone undetected.

So you’re quite right, we need to do more testing.

Fauci repeated what he’s said before, that the federal government is not going to mandate vaccines for the country. But once the FDA fully approves the vaccines that are now under emergency use authorization, “you’re going to see the empowerment of local enterprises giving mandates,” Fauci said.

“That could be colleges, universities, places of business, a whole variety. And I strongly support that. The time has come, as we have to go the extra step, to get people vaccinated.

“You want to persuade them, that’s good. And I believe that some people on their own, once it gets approved as a full approval, will go ahead and get vaccinated. But for those who do not want, I believe mandates at the local level need to be done.”

Fauci said he’s “very much in favor” of vaccine mandates for medical professionals: “If you want to see patients and you want to participate in health care, you need to get vaccinated, period,”

Fauci repeated President Joe Biden’s line that we are now in a “pandemic among the unvaccinated,” which may give rise to vaccine-resistant mutations.

Fortunately for us, the vaccines do quite well against delta, particularly in protecting you from severe disease. But if you give the virus a chance to continue to change, you’re leading to a vulnerability that we might get a worse variant. And then that will impact not only the unvaccinated, that will impact the vaccinated because that variant could evade the protection of the vaccine.

So people who are unvaccinated should think about their own health, that of their family, but also the community responsibility to crush this virus before it becomes even worse.

Fauci said it still holds true that children are less likely to get seriously ill from COVID compared with the elderly or those with underlying conditions, “but less doesn’t mean zero,” he said:

“And there are a lot of children now — all you need to do is do a survey of the pediatric hospitals throughout the country, and you’re seeing a considerable number of young people who are not only infected, but who are seriously ill.

“Again, the numbers compared to the elderly are less, but that’s a false comparison. These kids are getting sick. We’ve really got to make sure we protect them.”

Fauci said protecting children means surrounding them with vaccinated people, “whoever they are, teachers, personnel in the school, anyone, get them vaccinated. So protect the kids with a shield of vaccinated people.

“For the kids who can’t get vaccinated, that’s the reason why we’re having a strong recommendation that in the schools everybody should wear a mask, whether or not you’re vaccinated. We’ve got to protect the children, Chuck.”