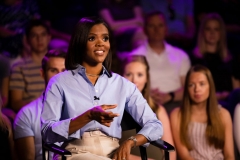 andace Owens hosts a taping of “Candace” on August 2, 2021 in Nashville, Tennessee. The show will air on Tuesday, August 3, 2021. (Photo by Brett Carlsen/Getty Images)

(CNSNews.com) – Blexit founder Candace Owens said Sunday that the left is losing control of the narrative, which is why it’s trying to censor conservatives on social media.

“I speak all over the country, and I wouldn’t do that if I was not optimistic. I’m incredibly optimistic, because it’s very apparent that the left is losing control of the narrative. If they weren’t losing control the narrative, it wouldn’t be necessary to censor so many conservatives. It wouldn’t have been necessary to censor the then sitting president of United States President Donald Trump,” she told Fox News’s “Sunday Morning Futures.”

“You wouldn’t see these efforts at propaganda, these calls to pull people like me off of the Internet because our following is bigger than entire networks like CNN, and so they’re fearful because they realize that people are waking up to the truth, especially when it comes to black America, right?” Owens said.

“So, despite all of their rhetoric, think about this. If you’re feeling low about things, despite all of their rhetoric castigating Donald Trump, calling him a racist, a white supremacist for four years straight, calling all of his supporters racists and white supremacists, President Donald Trump increased black voters and Hispanic voters for the Republican Party,” she said.

“Why is that possible? Because black Americans and Latino Americans are no longer falling for the rhetoric, and they know this. This is why they’re going through extremes. This is why they are fighting tooth and nail to make sure that mail-in ballots becomes the norm in terms of how we vote in this country. This is why they want to keep this existential crisis of a pandemic going on for as long as possible,” Owens said.

“So, yes, every single day, I wake up, and I am hopeful, because what they look like to me are incredibly desperate individuals,” she said.

Owens said that House Speaker Nancy Pelosi (D-Calif.) shouldn’t be confident that the Democrats will keep the majority in the House.

“Yes, I mean, she says that every single time, and I don’t think she should be confident, and let me tell you what’s so special about this country, when weighed against all of the other countries who are fighting right now for their rights. We know there are protests every day in the U.K. There are protests in France. There are protests in Germany demanding an end to these lockdowns, because people are — reality is catching up with the narrative, right?” she said.

“People are realizing. They’re telling you to be fearful, but they don’t feel fearful. They’re realizing that it’s the media that keeps telling them they’re all going to die every single day, and yet they wake up, and that just doesn’t seem to be the reality, and people are standing up,” Owens said.

“What makes America unique is that we have state rights, right? The federal government can’t come in and say, you know what, it doesn’t matter. We’re going to take things over, and that is why they are fighting people like Governor DeSantis. It’s why they are fighting Governor Abbott. It is because they are realizing that America is unique and that we — the federal government is not going to have this overreach,” she added.