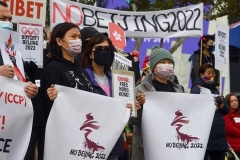 Campaigners including Uyghurs and Tibetans demonstrate in Melbourne, Australia in June, calling on the government to boycott the Beijing 2022 Winter Olympics. (Photo by William West/AFP via Getty Images)

(CNSNews.com) – With the curtain falling on the pandemic-marred Tokyo Olympics on Sunday, the spotlight moves to the Winter Olympics in Beijing, just 180 days away, amid increasing calls to boycott an event hosted by a regime that stands accused of genocide.

With China having been overtaken at the finish line by the United States in the race for the most gold medals in Tokyo, state media turned their attention to the 2022 games, which will make the Chinese capital the first city ever to have hosted both summer and winter Olympics.

“Some Western politicians have already started their hype about diplomatic boycott of Beijing 2022 and imposed pressure on Olympic sponsors,” commented the Global Times, a Chinese Communist Party (CCP) organ. “This is political extremism, which is the largest enemy of the Olympic Games and also the biggest threat to humanity’s unity.”

Demands for the Feb. 4-20 event to be moved out of China or face a boycott – either diplomatic or total in scope – have come from hundreds of human rights advocacy groups, as well as lawmakers in  a number of Western democracies.

In the U.S., the calls have come from voices ranging from House Speaker Nancy Pelosi to former Vice President Mike Pence.

Resolutions in the U.S. House and Senate press for the event to be moved to “a country that recognizes and respects human rights.” In June the Senate passed legislation prohibiting the use of federal funding to support diplomatic attendance at the 2022 games, but making an exception for athletes and sports bodies staff. The House has yet to pass the measure.

The State Department has for months been “consulting with allies and partners” on the issue.

At the center of the campaign is outrage over China’s policies in the Xinjiang region – which the U.S. and others have determined amount to genocide against minority Uyghurs – although its stifling of democracy in Hong Kong and early mishandling of the coronavirus outbreak have also fueled the calls.

For months China’s foreign ministry has been responding hotly to rumblings about a boycott, pointing out that the International Olympic Committee (IOC) and national Olympic committees in general oppose such actions.

IOC president Thomas Bach said in a recent presentation to the U.N. Human Rights Council (HRC) in Geneva that the organization must remain politically neutral, having “neither the mandate, nor the capability, to change laws of sovereign countries.”

After Beijing hosted the Summer Games in 2008, human rights groups accused the IOC of squandering the opportunity to use its influence to press the Chinese government to make reforms. At the time repression in Tibet and other violations of religious freedom were a major focus.

At the HRC meeting, Vincent Metten of the Helsinki Foundation for Human Rights recalled that after Beijing was selected to host the 2008 games, the IOC had said that holding the high-profile event would “encourage China to embrace transparency and human rights.”

“Instead, the 2008 Olympics emboldened policies of the Chinese Communist Party that are fundamentally averse to human rights principles and norms,” he said.

Following the 2008 games, mounting pressure on the IOC eventually led to a requirement for future host city applicants to include human rights pledges, starting with the contract for the 2024 Summer Games, which will be held in Paris.

Human Rights Watch is calling for a diplomatic boycott of the 2022 games, arguing that governments should not “give the Chinese government the attention it is seeking or attend the games, when Beijing’s mistreatment of Xinjiang’s 13 million ethnic minority Muslims stands in stark contrast to the Olympic ideals of celebrating human achievement and dignity.”

It is also calling on the multinational companies that sponsor the Olympics to use their considerable leverage.

“Even if they’re afraid to ask the Chinese government to change its human rights policies because they do business in China, they could ask the IOC to step up and protect athletes and human rights in China,” said HRW director of global initiatives Minky Worden.

State Dept: ‘Not Going to Offer Advice to US Companies From This Podium’ on Boycotting Beijing Games (April 7, 2021)