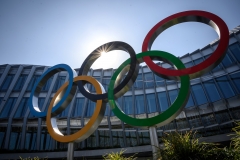 The Olympic Rings logo is pictured in front of the headquarters of the International Olympic Committee (IOC) in Lausanne. (Photo credit: FABRICE COFFRINI/AFP via Getty Images)

The Olympics are about over. Will they survive? Given the way the ruling class is embracing the politics of the Left, who knows? Here are ten reasons why the Olympics run afoul of “progressive” thought.

The only god worshipped by the Left is egalitarianism. This explains why they hate the games: The Olympics reward hard work and achievement. To top it off, they are color blind. What’s left for the Left to like?