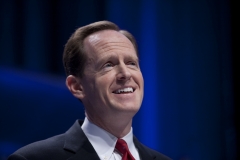 (CNS News) – When asked whether he will be able to read the 2,702-page infrastructure spending bill now under consideration in the Senate, Senator Pat Toomey (R-Penn.) said, “Probably not.”

At the U.S. Capitol on Thursday, CNSNews.com asked the senator, “Will you read all 2,702 pages of the infrastructure bill before you vote on it?”

CNSNews.com then asked the follow-up question, “Do you believe any of your colleagues will read all 2,702 pages?”

The senator replied, “I don’t know. We have, probably have different ways of evaluating what’s in the bill, and allocating that bill among the staff and ourselves. You’ll have to ask them how they do it.”

CNSNews.com: “Will you read all 2,702 pages of the infrastructure bill before you vote on it?”

CNSNews.com: “All right, and do you believe that any of your colleagues will read all 2,702 pages?”

Sen. Toomey: “I don’t know. We have, probably have different ways of evaluating what’s in the bill, and allocating that bill among the staff and ourselves. You’ll have to ask them how they do it.”