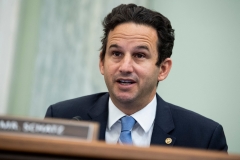 (CNS News) — When asked whether he will read all 2,702 pages of the infrastructure bill before voting on it, Senator Brian Schatz (D-Hawaii) said, “I always read all the bills.” But, he added, “just reading it on your own doesn’t really inform you.”

Senator Schatz said, “I always read all the bills, I always have my staff help me to interpret the bills.”

He continued, “The way a lot of these bills work is that they actually refer to other statutory law, so just reading it on your own doesn’t really inform you. You need expert staff to tell you what’s being referred to.”

When asked the same question, Senator Thom Tillis (R-N.C.) said, “In truth, it’s not just 2,700 pages, it’s all the sub-references to the legislative existing statutes. We have a standard process that we go through. All my staff are subject matter experts, and I read a lot, but I’m not going to read all of it. That’s why I have 60 staff between the state office and D.C. office to advise me on areas that are in contention.”

He continued, “The vast majority of the legislative text is consensus text. What I read are the things that are in contention.”

Democratic Senator Ben Cardin of Maryland, when asked whether he would read the entire bill, said, “I’m working on it. We are reading sections of it. Obviously I’m starting with the sections I have the principle responsibility, but we’re trying to get through all of it, either myself or staff.”

In a follow-up question, CNS News asked Senator Cardin, “And do you believe any of your colleagues will read through the entire bill?”

The House voted to pass its infrastructure bill on July 1. Should it pass in the Senate, it will be “the largest long-term investment in our infrastructure and competitiveness in nearly a century,” reads the White House statement.