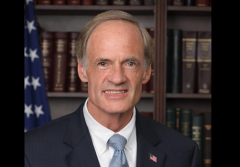 (CNS News) – When asked whether he will be able to read the 2,702-page infrastructure spending bill now under consideration in the Senate, Senator Tom Carper (D-Del.) said, “We’ve scheduled in about four weeks for me to do that.”

At the U.S. Capitol on Tuesday, CNSNews.com asked the senator if he will be able to read all 2,702 pages of the infrastructure bill before he votes on it.

Sen. Carper replied, “I’m not sure—I don’t think—I’ve, we’ve put in, we’ve scheduled in about four weeks for me to do that. If I read every word. It’s going to take a while.