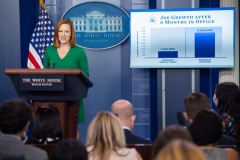 White House Press Secretary Jen Psaki speaks during the daily press briefing on August 6, 2021, in the Brady Briefing Room of the White House in Washington, DC. (Photo by SAUL LOEB/AFP via Getty Images)

(CNSNews.com) – President Joe Biden on Friday celebrated reaching 5.4 percent unemployment rate last month – the best since March 2020 – but the White House said it’s still important to pass an infrastructure package and the president’s Build Back Better Agenda, because it makes long-term investments and makes the U.S. more competitive in the long term.

DOOCY: First on the jobs report, if the economy is so great, and you guys are celebrating jobs being created at a–

DOOCY: This is my question. Why then is the president still pushing for big relief packages, pandemic-era relief packages like the eviction moratorium?

PSAKI: Well first I would say one of the biggest pieces of legislation he’s pushing for as you know is the infrastructure package and also the Build Back Better Agenda. Most of the components in those packages are long-term investments. They’re overdue. They’re meant to modernize our infrastructure, put people back to work over the long-term and make us more competitive over the long term.

It is still a reality even with a good jobs number this month, and even with 4 million jobs created over six months that there are still people out of work. There are still people who don’t have enough money to make ends meet. That’s one of the reasons why we designed the American Rescue Plan to have a long-term spread out impact, whether it’s the child tax credit or benefits that are going to schools that are spread out over the course of a year, cause we are still in a recovery.