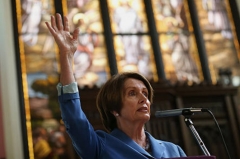 Archbishop Salvatore J. Cordileone of San Francisco, who presides over the archdiocese where House Speaker Nancy Pelosi (D.-Calif.) lives, sent out a tweet on Sunday of a story in LifeNews.com that was headlined: “Nancy Pelosi Blocks Vote on Bill to Ban Taxpayer-Funded Abortions for the 55th Time.”

The LifeNews.com story tweeted out by Archbishop Cordileone said in part:

“The count is now at 55 times over the last month. That’s how many times Speaker Nancy Pelosi and her Democrat colleagues in the House have blocked a request from Republicans on the House floor to have a vote on a bill to ban taxpayer-funding of abortions. …

“The Hyde Amendment, which has strong public support, prohibits taxpayer funding for elective abortions in Medicaid and other federal programs. Since 1976, it has saved an estimated 2.4 million babies’ lives, including about 60,000 each year, according to the Charlotte Lozier Institute.

“Research by Charlotte Lozier Institute associate scholar Dr. Michael New estimates the Hyde Amendment has saved about 2.4 million babies from abortions. Prior to the amendment, in the 1970s, Americans paid for about 300,000 unborn babies’ abortion deaths each year, according to a report from the Family Research Council.”

At her press conference on July 22, Pelosi cited her Catholic faith while explaining why she favored federal funding of abortion. “As a devout Catholic and mother of five in six years, I feel that God blessed my husband and me with our beautiful family, five children in six years almost to the day,” she said.

Archbishop Cordileone responded that day with a statement. He said:

“Let me repeat: no one can claim to be a devout Catholic and condone the killing of innocent human life, let alone have the government pay for it.  The right to life is a fundamental – the most fundamental – human right, and Catholics do not oppose fundamental human rights.  To use the smokescreen of abortion as an issue of health and fairness to poor women is the epitome of hypocrisy: what about the health of the baby being killed?  What about giving poor women real choice, so they are supported in choosing life?  This would give them fairness and equality to women of means, who can afford to bring a child into the world. It is people of faith who run pro-life crisis pregnancy clinics; they are the only ones who provide poor women life-giving alternatives to having their babies killed in their wombs.  I cannot be prouder of my fellow Catholics who are so prominent in providing this vital service.  To them I say: you are the ones worthy to call yourselves ‘devout Catholics’!”