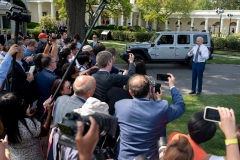 President Joe Biden speaks next to a Jeep Wrangler Rubicon 4xe after delivering remarks on the steps his Administration is taking to strengthen American leadership on clean cars and trucks on the South Lawn of the White House in Washington, DC, on August 5, 2021. (Photo by JIM WATSON/AFP via Getty Images)

(CNSNews.com) – President Joe Biden threw shade at Florida Gov. Ron DeSantis on Thursday for saying the governor would stand in the way of those “coming after” the rights of parents in Florida by opposing his decision to ban mask mandates for students in schools.

After an event on clean cars and trucks, a reporter asked Biden about DeSantis’ remarks, saying the governor is “using your words about don’t be in the way, and he’s saying, I am in the way to block too much interference from the federal government. Your response, Mr. President.”

“That’s my response,” the president said.

In a message to the governors of states like Texas and Florida, who oppose mask mandates for schools, the president said Tuesday, “If you’re not going to help, get out of the way.”

“If you are coming after the rights in Florida, I am standing in your way,” DeSantis responded Wednesday.