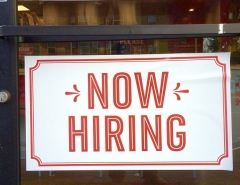 (CNSNews.com) – Amid the recent emergence and rapid spread of the delta variant in the United States, and with expanded unemployment benefits and monthly child tax credits (stimulus) payments flowing to millions of Americans, the Labor Department on Friday nevertheless issued an encouraging report on the U.S. employment situation.

As the number of employed Americans went up last month, the number of unemployed people dropped to 8,702,000, down 782,000 from the previous month.

In July, the civilian non-institutional population in the United States was 261,469,000. That included all people 16 and older who did not live in an institution, such as a prison, nursing home or long-term care facility.

Of that civilian non-institutional population, 160,935,000 were participating in the labor force, meaning they either had a job or were actively seeking one during the last month. This resulted in a labor force participation rate of 61.7 percent in July, compared with 61.6 in June. This important measure has remained within a narrow range of 61.4 percent to 61.7 percent since June 2020. It reached a high of 63.4 percent during Trump’s presidency.

The number of Americans counted as not in the labor force — meaning they didn’t have a job and were not looking for one — dropped by 130,000 to 100,123,000 in July, close to where it’s been in recent months. This number includes retirees and other people who do not have a job and do not want one.

Among the unemployed, the number of persons on temporary layoff fell by 572,000 to 1.2 million in July. This measure is down considerably from the high of 18.0 million in April 2020, the height of the pandemic.

In July, the number of persons employed part time for economic reasons — because their hours had been reduced or they were unable to find full-time jobs — showed little change at 4.5 million.

In July, average hourly earnings for all employees on private nonfarm payrolls increased by 11 cents to $30.54, following increases in the prior 3 months.

“Even in the midst of a vaccine-induced recovery, only 10 percent of small businesses say they’ve fully recovered from the pandemic, according to the latest JCN Foundation Monthly Monitor Poll of small businesses, and that’s only a 1 percent increase from the previous month.

“Even these gains are in danger,” Ortiz warned, as blue state governors and mayors impose new mandates…on small businesses that are already experiencing staffing shortages.”

Ortiz pointed to a recent poll showing that 36 percent of small businesses named inflation as their biggest or second biggest concern, up four points from the previous month. “All across the country, small businesses are ready to lead America’s vaccine-induced recovery. The best thing government officials can do is get out of the way,” he said.

In a July 28 speech, Federal Reserve Chairman Jerome Powell noted that conditions in the labor market were continuing to improve: “Demand for labor is very strong,” he said, noting that employment rose 850,000 in June.

“Nonetheless, the labor market has a ways to go,” Powell said. “The unemployment rate in June was 5.9 percent, and this figure understates the shortfall in employment, particularly as participation in the labor market has not moved up from the low rates that have prevailed for most of the past year.

“Factors related to the pandemic, such as caregiving needs, ongoing fears of the virus, and unemployment insurance payments, appear to be weighing on employment growth.  These factors should wane in coming months, leading to strong gains in employment.

Powell also noted that the delta varient was and is producing a rising number of cases:

What we’ve seen, though, is with successive waves of COVID over the past year and some months now, there has tended to be …less in the way of economic implications from each wave. And we will see whether that is the case with the delta variety. But it’s — you know…it’s certainly a — not an unreasonable expectation.

So, it certainly is plausible, if people would pull back from some activities because of the risk of infection. Dining out, traveling, schools might — some schools might not reopen. We may just — we may see economic effects from some of that, or it might weigh on the return to the labor market. Some people might choose — again, we don’t have a strong sense of how that might work out, so we’ll just be monitoring it, monitoring it carefully.