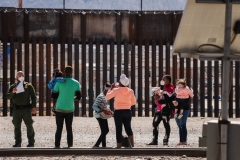 (CNSNews.com) – The Biden administration is working to “develop a plan for a consistent and safe international travel policy,” but given that the United States is still dealing with the Delta variant of COVID-19, the administration plans to “maintain existing travel restrictions at this point,” the White House said Thursday.

White House Press Secretary Jen Psaki was asked about a report that the administration is developing a plan to require all foreign visitors to the U.S. to be fully vaccinated against COVID-19.

At the same time along the southern border, McAllen, Texas, approved a temporary emergency shelter to house thousands of COVID positive migrants.

There were 7,000 confirmed cases of COVID positive migrants released into the city since February, including over 1,500 new cases in the past seven days.

“There are reports the administration wants to require all foreign visitors to be vaccinated. Would that include migrants arriving in Texas and Arizona and then released into border towns?” Fox News White House Correspondent Peter Doocy asked.

PSAKI: I know there were a range of reports about this, so let me just give you a little bit of an update on this. One moment, and I know you asked two questions there, and I promise I’ll address them both. We, one– let me reiterate, and I know Francesca asked the question about this the other day, the importance of international travel.

Given where we are today with the Delta variant, we will plan to maintain existing travel restrictions at this point.

However, what our interagency working groups are focused on – and this is I think what was reported – is working to develop a plan for a consistent and safe international travel policy, and that will be done through the prism of providing consistent guidance, equitable guidance, digestible guidance, and there’s a lot of confusion about what the restrictions are now, and you all have asked a lot of good questions about it, because it feels inconsistent, and it is, but that’s what our focus is, so that is certainly under strong consideration, but it is under a policy process review right now that I won’t get ahead of myself.

As it relates to, I know there was also reporting about the vaccination of migrants. That’s not what the CBP was doing. There are NGOs and other international organizations who are vaccinating migrants as they come across the border, and as they work in partnership with us. Certainly, that helps keep a range of people safe in the country.

DOOCY: But do you think it’s keeping people safe in McAllen, Texas, where 7,000 confirmed COVID positive minors have been released into the city since February – 1500 in the last seven days?

PSAKI: Well I think it’s important to note what’s actually happening in McAllen. So there’s actually been, they signed a disaster declaration and proved setting up a temporary emergency shelter to provide a space to create an isolated space to mitigate this issue, and what happens is DHS, this is the process of what happens, the agency, one, we’re continuing to enforce Title 42, resulting first in the expulsion of a vast majority of those encountered at the border.

We also– CBP also provides migrants who can’t be expelled under Title 42 with PPE. They’re required to wear the PPE. If any exhibit signs of illness and CBP custody, they’re referred to local health systems for appropriate testing, diagnosis, isolation and treatment, and obviously, there are steps taken as needed as this is certainly evidence of.