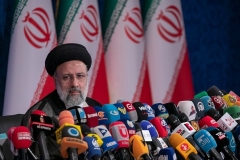 At a time when human rights groups are pushing for an independent investigation into allegations of mass atrocities during Ebrahim Raisi’s career in Iran’s judiciary, the E.U.’s foreign division, the European External Action Service (EEAS) sent its deputy director general Enrique Mora to the inauguration.

The move comes as the U.S. and allies mull a response to a deadly drone attack on a commercial ship in the Arabia Sea, which they have blamed on Iran. The ship’s Romanian captain was killed in the attack, along with a British national. Romania is an E.U. member-state.

In justifying the decision to send Mora to the inauguration, the EEAS made clear that the priority of E.U. foreign policy chief Josep Borrell was the push to salvage the Iran nuclear agreement, which has been on the rocks since President Trump withdrew in 2018.

The Obama-era Joint Comprehensive Plan of Action (JCPOA) offered Tehran sanctions relief in return for curbs on its nuclear energy program. Trump called it the worst deal he had ever seen.

In response to the U.S. exit the regime began to walk away from its JCPOA commitments, even as the E.U. – which has a convening/coordinating role – scrambled the save the deal.

President Biden is seeking a return to compliance on the part of both the U.S. and Iran, and six rounds of talks have been held in Vienna aimed at achieving that goal.

“It is crucial to engage diplomatically with the new administration and to pass directly important messages,” she said.

Noting Borrell’s role as coordinator of the nuclear deal, Massrali said his “key priority is to resume negotiations in Vienna and facilitate the way back to full JCPOA implementation.”

Iran’s foreign ministry on Wednesday posted a photo of Mora meeting with deputy foreign minister Abbas Araqchi, who has led the Iranian team in the Vienna talks.

Before running for the presidency Raisi served as Iran’s chief justice, deputy chief justice and other positions.

While Tehran’s deputy prosecutor in the late 1980s, he was allegedly one of a four-man secret commission, tasked by Ayatollah Ruhollah Khomeini to purge anti-regime dissidents, thousands of whom were summarily executed.

Raisi’s role in the so-called “death commission,” along with more recent rights abuses, were cited by the U.S. Treasury when designating him for sanctions in 2019.

In May, scores of rights campaigners, Nobel laureates and others, urged the U.N. Human Rights Council to establish an independent commission of inquiry into the 1988 mass killings

The following month, the U.N.’s investigator on human rights in Iran called for an independent inquiry into the allegations, and the role played by Raisi.

Despite these concerns, when Raisi won Iran’s stage-managed election last June, Borrell’s first public response when asked by a reporter for his reaction was to focus on the nuclear deal.

“We hope that the Iranian elections and the new president will not affect the ongoing negotiations in Vienna about how to go back to the JCPOA deal,” he said. “That is for us the most important issue.”

Some European lawmakers slammed the decision to send Mora to Tehran.

“It is incomprehensible that the E.U. is sending a delegation to the inauguration of a man with so much blood on his hands,” tweeted Gert-Jan Segers, a Dutch member of the European Parliament (MEP).

“The presence of the E.U. representative at the president’s inauguration is an insult to the Iranian people, who showed with a widespread boycott of the fraudulent June elections that Raisi is not their representative,’ wrote Belgian national lawmakers Darya Safai, Theo Francken, and Michael Freilich in a joint statement.

“It’s also contradictory to the human rights values that the European Union claims.”

Calling Mora’s presence at the ceremony “a disgrace to the European institutions,” the trio urged the E.U. to “reconsider its interaction with the terrorist regime of the Islamic Republic.”

Masih Alinejad, an exiled Iranian activist and U.S. citizen recently targeted in a foiled regime kidnap plot, said she was “furious” to hear that Mora was going to the inauguration.

“This empowers Raisi, who has committed crimes against humanity, to kill more people,” she said.

Last fall the E.U. rejected and boycotted the inauguration of Belarus’ Alexander Lukashenko, whose disputed re-election had prompted mass protests.

Queries sent to the EEAS, including an invitation to explain the basis for treating Lukashenko and Raisi differently, brought no response by press time.