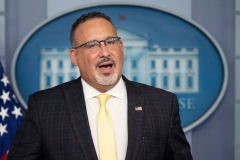 Education Secretary Miguel Cardona speaks during the daily press briefing on August 5, 2021, in the Brady Briefing Room of the White House in Washington, DC. (Photo by JIM WATSON/AFP via Getty Images)

However, beyond “conversations,” Cardona would not specifically say what the Education Department would do to force the hand of states that oppose mask mandates in schools.

“We want to be an ally and make sure that we’re supporting our students,” the secretary said.

“My question is: You’ve talked a bunch about, kind of, science not being in the way, not — politics not being able to get in the way of science,” PBS Newshour White House Correspondent Yamiche Alcindor said.

“We’re seeing places where school districts want to mandate masks, but obviously state leaders are saying they can’t do that.  What could the Education Department do to ensure that those leaders have–” Alcindor asked.

CARDONA:  Sure. We’re going to constantly work with those states, with those leaders. At the end of the day, we’re on the same team for the kids, right? And, you know, I applaud Governor Hutchinson for what he’s doing, and I recognize that we have to be malleable to address the increase in spread, and that requires partnership.

And my hope is that students go into schools in those communities as well, but if we’re starting to notice that students are not going in because they don’t feel confident, then we’re going to have to have conversations about that.

ALCINDOR: Those conversations, you said you don’t want to withhold money. Is there anything else that the Department can do if it’s not — that won’t hurt kids but that can send a message that science and politics can’t mix?

CARDONA: We’re in this to stay, and we want to make sure those kids get into school, and we’re going to do everything we can to make that happen.