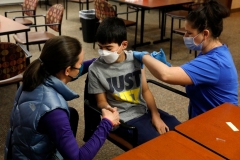 Jamie Blank (L) holds her son, Ari Blank’s hand as he receives the Pfizer-BioNTech Covid-19 vaccine from healthcare worker Jen Feinberg (R) at the Jewish Federation/JARC’s offices in Bloomfield Hills, Michigan on May 13, 2021. (Photo by JEFF KOWALSKY/AFP via Getty Images)

Makary said he’s concerned that there may be another year of virtual learning in schools, “because Delta is projected to peak in late August and early September.”

“As schools are starting to open up you’ll see the incline that will be interpreted as the beginning of a larger wave, but this is not a stock price. This is the number of cases. It only captures the cases reported, not home cases, and it doesn’t recognize it’s in a younger population and hospitalizations are disproportionately much lower,” he told Fox News’s “America’s Newsroom” on Thursday.

He said the Delta variant spread quicker, “but there’s still evidence that it’s more virulent and dangerous in kids.”

“If you go to COVID net on the CDC website, you’ll see the rate of hospitalizations for COVID on that site is 0.3 per million in the population. We’ve imposed a tremendous amount of restrictions on 50 million kids. I can’t believe it’s now going to be coming on two years when we ask them to cover their faces and give up their livelihoods based on really flimsy data,” Makary said.

“We don’t even know how many deaths were verified or how many were in healthy kids versus kids with a co-morbid condition. The CDC director herself said she didn’t know,” he added.

Makary said that there’s been “a tremendous toll on kids’ mental health or development, on nutrition and these other things discounted when we focus only on cases and transmission.”

When asked whether vaccinated people are worried about the government continuing lockdowns, mask mandates, and closing schools if we don’t get enough people vaccinated, Makary said, “Well, look, there’s been over 1,000 variants.

“We track them very closely on an international website called nextstrain.org, and you can go on there and see that of the — all the variants out there, over 1,000. The immunity that we have is entirely encompassing,” Makary said.

“So the idea that there’s going to be a new variant that’s gonna emerge – by the way, the bar gets higher the more contagious the current variant is – that it’s going to somehow change the game, I think it’s unfair. Dr. Fauci alluded to it yesterday. I think it was really an unfair projection as to what’s going to happen. Delta will be with us for a long time, because it has out-competed the other variants out there,” he said.