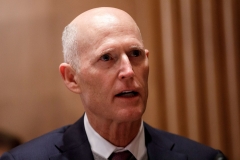 At the U.S. Capitol on Tuesday, CNS News asked the senator, “Should the Biden administration work with Facebook to suppress postings it considers to be vaccine misinformation?”

Sen. Scott said, “Should the Bid – [laughs] — no! I mean, it’s disgusting. I mean first off — so first off, the social media is now a big part of the government, so, if they’re doing that and so they’re—they should be, they should already be regulated.”

“If they are going to be publishers and decide the things, they should regulated like all of the publishers,” he added.  “But yeah, the Biden administration shouldn’t be doing that.”

Last week, the Biden administration admitted that it is working with Facebook to suppress certain posts on Facebook that contain alleged “vaccine misinformation.”

Also on July 16, White House Press Secretary Jen Psaki said the administration is “in regular touch with these social media platforms, and those engagements typically happen through members of our senior staff, but also members of our COVID-19 team, given, as [U.S. Surgeon General] Dr. Murthy conveyed, this is a big issue of misinformation, specifically on the pandemic.”

“You shouldn’t be banned from one platform and not others, uh – if you – for providing misinformation out there,” she said.

Psaki then explained four suggestions the White House has given to Facebook and commented, “We engage with them regularly and they certainly know what our asks are.”

However, Psaki told CNS News during her press conference on July 19 that the White House has “not asked Facebook to block any individual posts,” but the Biden administration “certainly raised where we have concerns about information that’s inaccurate that is traveling out there in whatever platform it’s traveling on.”

Her statement makes it abundantly clear they want people banned for simply disagreeing with the government’s pre-approved narrative. https://t.co/3Yjo9314cW