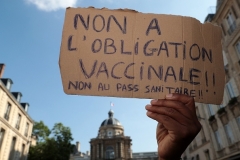 ‘No to compulsory vaccination’ reads a placard held during a protes march in Paris on Thursday. (Photo by Joël Saget/AFP via Getty Images)

Paris (CNSNews.com) – French lawmakers are discussing controversial new measures announced by the government in a bid to counter the rise of the “delta” variant of the coronavirus, and Prime Minister Jean Castex voiced hope Wednesday that implementation would start at the beginning of next week.

Thousands of people rallied last week to protest the measures, which include the requirement to show a “health pass” (passe sanitaire) before entering any venues attracting more than 50 people, such as movie theaters and sports halls. The requirement will be extended to cafes, restaurants and shopping malls next month.

The government also plans to make vaccination mandatory for health workers, from September.

The health pass will provide proof that the holder has been vaccinated or has tested negative for COVID-19.

Castex warned that that the “delta” variant of COVID-19 was “much more contagious” and spreading fast.

Of the 18,000 new COVID-19 recorded by public health authorities on Tuesday – twice the number of the day before – 96 percent were not vaccinated, he said.

Castex said the government would allow a transition of “at least seven days” in which to explain to people what is expected of them, “before asking law enforcement to fine those who don’t follow the rules.”

Businesses owners and event managers will be required to check passes, and could be fined up to $1,760 if they fail to do so. Employees at those places will also have to show passes, and with effect from August 30 will risk suspension for up to two months without pay if they are not fully vaccinated.

Castex said that students at colleges and elementary and high schools will not need a pass to enter their establishments until September, when the government will begin a campaign to vaccinate 12-17 year-olds.

The proposals were presented to the lower House where the government hopes for quick approval before it moves to the Senate.

Some lawmakers from right- and left-wing parties in opposition to President Emmanuel Macron’s government are not in favor of some the measures, especially vaccine mandates and requirements to wear masks – indoor for most of the country, and even outdoors in some cities.

“This authoritarian health pass shows your failure,” said François Ruffin, a lawmaker with the leftist Rebellious France movement. “Rather than targeting vaccination for those who are most at risk, you are restricting freedoms and tearing the nation apart.”

Sébastien Chenu, spokesperson for the right-wing National Rally, said he understood the anger of those opposed to the health pass.

“This is not a dictatorship but a decline in our freedoms,” he said. “Countries in which it is necessary to control citizen’s state of health to drink a coffee are quite rare.”

Some also criticized the speed at which the government is pushing the proposals through the legislature, and planning to begin implementing the measures.

“We are angry at the way in which the work on this text is unfolding,” said socialist lawmaker Cécile Untermaier.

But François Jolivet, a member of Macron’s Republic in Motion movement, countered, “We are in a situation of war. We must decide quickly.”

Despite opposition among lawmakers, however, the proposals are expected to be approved.

Some lawmakers are trying to add amendments to slow down discussion, but all are aware it must be voted on by both houses by the end of the week, in order for it to be published in the official journal and be implemented by the beginning of August.

On the issue of vaccinations, Castex said the government goal was to have at least 40 million people having receiving a first dose by the end of July and 50 million by the end of August.