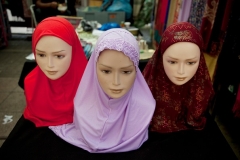 Muslim headscarves displayed for sale. (Photo by In Pictures Ltd./Corbis via Getty Images)

Berlin (CNSNews.com) – A recent ruling by Europe’s highest court allowing a workplace ban on Muslim headscarves has reignited debate here over the question of allowing religious symbols in public life.

Turkey expressed outrage at the European Court of Justice (ECJ) ruling, with Vice President Fuat Oktay saying it will allow “violence and discrimination.”

“I strongly condemn such an ambivalent decision that destroys the freedom of religion and conscience,” Oktay told reporters in Ankara.

The ECJ ruled last Thursday that two German employers’ ban on headscarves, challenged by two Muslim women, was acceptable where companies had a “genuine need” to “present a neutral image to customers.”

The court stressed that a ban would not constitute discrimination if it applied to all religions, and noted that one of the two employers concerned, a childcare center, prohibited staff from wearing any religious item, including Jewish kippahs or Christian crosses. (The other employer is a chain of retail stores.)

The question of bans on headscarves in workplaces or public life has been a sensitive one across the E.U. Article 10 of the E.U. Charter enshrines a right to religious freedom, but the wearing of headscarves has been restricted to varying degrees in several of the 27 member-states.

Some countries, such as Austria, France, and Belgium have banned full-faced veiled coverings. Varying levels of restrictions on Islamic veils are also in place in Bulgaria, Denmark, Latvia, and Luxembourg.

It has also been a thorny issue in Germany, where the Muslim population has grown by about 900,000 since 2015, according to an April study. It estimated there are currently between 5.3 and 5.6 million Muslims with a “migration background,” accounting for 6.4-6.7 percent of the German population.

Germany also has the largest population of ethnic Turks anywhere outside of Turkey. Turks are Germany’s biggest ethnic minority.

“With the current decision, the ECJ has strengthened economic freedom and private autonomy,” Puttrich wrote in an op-ed for The European.

“The decision is to be welcomed because there is a crucial difference between the state and private companies,” she said. “As a victim, one cannot withdraw from the state. Customers, on the other hand, can decide whether they prefer to go shopping with multicultural or strictly neutral retailers.”

“Now we only need German judges who have the courage to follow the ECJ judgment – and NO, that would be neither exclusion, discrimination nor racism, but common sense!” she wrote on Twitter.

Human rights advocacy organizations, however, were troubled by the ruling, with Human Rights Watch saying it “jeopardized” religious freedom.

“The court’s reasoning that allowing religious dress could harm a business’ ability to operate rests on the flawed logic that a client’s objections to employees wearing religious dress can legitimately trump employees’ rights,” said Hillary Margolis, a senior researcher for the group.

“‘Neutrality’ has previously been used to justify similar bans in the public sector,” she said. “This decision extends that logic to the private sector and opens the door to widespread discrimination in the workplace.”

Bekir Alta, secretary-general of the Cologne-based Islamic Community Milli Görüs – criticized the decision as one which “further undermines the right of Muslim women to live and work as equals.”

“The European Court of Justice has left Muslim women in a dilemma to choose between their religion and work,” Altas said. “This cannot be convincing in a liberal democratic order.”