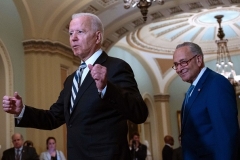 President Joe Biden met with Senate Majority Leader Chuck Schumer and the rest of the Democrat caucus to discuss his infrastructure plans on July 14. (Photo by ANDREW CABALLERO-REYNOLDS/AFP via Getty Images)

(CNSNews.com) – Senate Majority Leader Chuck Schumer (D-N.Y.) says he’s not trying to “jam” Republicans by holding a vote Wednesday on a “shell” bill that eventually will contain the language of a bipartisan infrastructure bill.

But Republicans wonder what Schumer is really up to:

“I had a hard time figuring out what the Democratic leader’s doing with this vote tomorrow,” Sen. Roy Blunt (R-Mo.) told a news conference on Tuesday.

“And it’s not going to turn out to be a hard vote for almost every Republican to decide we’re not going to vote to proceed to a bill that doesn’t exist yet. This is not a very high standard to set. We want to have a bill to go off…before we vote to go to a bill.

“Now, I don’t know if this is an effort to kill the bipartisan effort or just speed it up.

Blunt said Schumer can simply change his vote to the “no” side, which means he’d be able to bring it up for reconsideration at a later time. And if he doesn’t do that, Schumer will showthat he’s trying to kill the bipartisan infrastructure deal.

“What point is being made by not having a bill and voting to go to a bill that doesn’t exist is something I’m still trying to figure out,” Blunt said.

Schumer told a news conference on Tuesday that Wednesday’s first procedural vote will be held on a “shell” bill –“merely a vehicle,” he explained:

This is how we work in the Senate. We put a shell bill, it’s actually a House bill, because you need a bill from the House if you’re dealing with fiscal consequences, on the floor. And you move to proceed and then you build on it. No one’s voting on anything except to move forward on a–on a bipartisan bill tomorrow.

And it’s not an–this is not a deadline that determines every final detail of the bill. Not close to it. It’s not an attempt to jam anyone. It’s just a vote on whether senators are ready to begin the debating the issue.

And even Republicans will tell you, since I set a deadline, they’re moving much more quickly in the negotiations than they were before. Again, a “yes” vote tomorrow is simply that the Senate is ready to begin debating a bipartisan infrastructure bill. No more, no less. We’ve waited a month, it’s time to move forward.

Once we get on the bill, there’s going to be plenty of time for the bipartisan group to continue its work. The bottom line is simple. If senators agree to start the debate, there are going to be many opportunities for the bipartisan group to make their agreement the base of the bill. And if they can’t come to agreement, to make parts of their bill added to the base bill.

And you know what the–the–if the bipartisan group is as close to an agreement as they say they are, then they should have no issues with this timeline. We’re going to give them every opportunity to finish their negotiations and make their agreement the final product on the Senate floor.

But if the Senate Republicans vote no tomorrow, they will be denying the Senate an opportunity to consider the bipartisan infrastructure framework. Okay, look, this has been, as I said, a routine process in the Senate all year.

When you say you must have the whole bill done before you go forward when negotiations have been going on for a month and there have been things added and things subtracted, you’ll never get it done.

Schumer noted that the “shell bill” approach has been used recently to pass other legislation.

He said he thinks there’s “goodwill on both sides to finish the bipartisan infrastructure bill before the August recess.

“That’s my goal. But in order to finish the bill, we first need to start. If you’re serious about getting a bipartisan bill done, there’s no good reason not to support the starting the process now. Democrats are ready to roll up their sleeves, move forward, and get to work and finish the job,” Schumer said.

Democrats also are eager to bring up the $3.5 trillion second half of President Biden’s infrastructure package — the part that deals with social programs (free education, green new deal, maybe even immigration reform) — social programs that never before have been defined as “infrastructure.”

Not a single Republican would vote for that bill, which crams much of the Democrat agenda into one huge package. Democrats hope to use the budget reconciliation process to pass the $3.5 trillion bill with 51 all-Democrat votes.

Senate Minority Leader Mitch McConnell on Tuesday said defeating the motion to proceed to the bipartisan infrastructure bill will not slow Democrats down. When the bipartisan bill is actually written, he said, Schumer can make sure it’s possible to reconsider the vote.

“In other words,” McConnell said, “no time is lost by adhering to a very simple principle — we’re not going to the bill until we know what the bill is.”