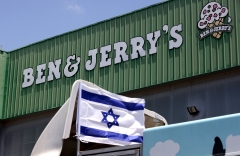 An Israeli flag is set atop a delivery truck outside US ice-cream maker Ben & Jerry’s factory in Be’er Tuvia, on July 21, 2021. (Photo credit: EMMANUEL DUNAND/AFP via Getty Images)

My group, Conference of Jewish Affairs, as with millions of Jews worldwide, is disgusted by the hypocrisy, cowardice, and anti-Semitism displayed Tuesday by the Ben and Jerry’s ice cream company in refusing to sell or produce its ice cream in the Jewish sections of Jerusalem and Jewish neighborhoods in the biblical regions of Judea and Samaria, totaling 15% of Israel’s Jewish population.

Ben and Jerry’s has now become a leader of the boycott and divestment campaign against Israel, though Israel is the only democracy in the Middle East and the only country in that entire region focused on preserving human rights and dignity.  Singling out the Jewish people or the Jewish nation for boycott and divestment is blatant anti-Semitism and not social justice.

What can be more hypocritical than a company such as Ben and Jerry’s producing and distributing its product in dozens of countries where there is no democracy, where people are killed because of their Jewish or Christian faith, and people are oppressed because of their differences, yet boycotting Israel due to a political matter, one which Israel consistently tries to resolve but is rebuffed by an Islamic hierarchy unsatisfied unless the Jewish state is dissolved and its citizens canceled and impaired?

Ben and Jerry’s sells in countless Muslim countries where Jews and Christians are consigned to second class and inferior status, prohibited from settlement and worship. Many of these governments actually murder and rape Christians in the name of Islamic nationalism, the ummah. Ben and Jerry’s also produces and sells in communist countries where human rights are violated daily.

Ben and Jerry’s punishment and ostracizing of Jews living in areas the Muslim world considers off-limits to Jews is an acquiescence to the infamous anti-Jewish theory called judenrein, namely that an area be formally free of Jews. Is that Ben and Jerry’s idea of social justice?

Ben and Jerry’s act of hypocrisy and willful assault against Israel is a capitulation to Hamas and to the “woke” world which is becoming more anti-Jewish by the day. The “social justice” and socialism of which today’s leftwingers are proud seems to abhor Judeo-Christian countries while being very comfortable with Islamic, communist, and leftwing authoritarian rulership. Ben and Jerry’s announcement will go down as a day of infamy in the food industry.

Rabbi Aryeh Spero is president of Caucus for America and author of Push Back.