(CNSNews.com) – China’s foreign ministry is voicing dissatisfaction about World Health Organization plans for the “second phase” of an ongoing investigation into the origins of the coronavirus outbreak that includes examining laboratories in Wuhan.

At the same time, the ministry on Monday threw its support behind calls by Chinese for the WHO, in seeking answers on the origins of the virus that causes COVID-19, to investigate a U.S. Army bio-lab in Maryland.

On Friday, WHO Director-General Tedros Adhanom Ghebreyesus announced proposals for the next steps of the virus origin investigation that include “audits of relevant laboratories and research institutions operating in the area of the initial human cases identified in December 2019.”

A day earlier, Tedros had described as “premature” the conclusion by a WHO-convened expert team after visiting Wuhan earlier this year that the possibility of the outbreak being linked to a laboratory accident was “extremely unlikely” – and therefore did not warrant further study.

Since the expert team’s report was issued last spring, Beijing has pointed to its effective dismissal of the “lab leak” theory as a conclusive determination that should not be challenged. It says China cooperated fully by allowing the team to visit for 28 days (half of it restricted to quarantine hotel rooms), and that it was time other countries do the same as the study continues.

But Tedros appealed to China to provide more data about the early stages of the outbreak, expressing the hope for “transparency” and “better cooperation.”

And by including Wuhan laboratories in the proposals for the next phase of the origins probe, he made clear that the lab-leak hypothesis remains one of those on the table.

(The proposals also include studies of animal markets in the Wuhan area, “animal trace-back activities” with additional epidemiology work including early sequences of the virus, and studies prioritizing geographic areas with the earliest indication of circulation of the coronavirus.)

In his comments on Friday, Tedros also announced that the WHO secretariat was establishing a permanent expert body which he said would “play a vital role in the next phase of studies into the origins” of the coronavirus, as well as the origins of future new pathogens.

He said nominations for “highly-qualified experts” to join the body known as SAGO (the international scientific advisory group for origins of novel pathogens) would be invited soon, including from WHO member-states.

Tedros did not say if or how the formation of SAGO would affect the international expert team convened last year, whose report after visiting Wuhan was met with skepticism from some governments and scientists. 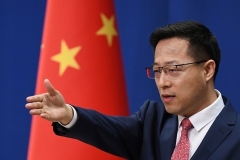 At a foreign ministry briefing in Beijing on Monday, spokesman Zhao Lijian did not conceal his displeasure over Tedros’ call that Wuhan labs be “audited” as part of the ongoing origin probe.

“The work plan on the second phase origins study proposed by the WHO secretariat is at odds with the position of China and many other countries on the issue,” he said. The WHO should draft its proposals in consultation with member-states and “listen to and take the advice of all parties.”

Zhao recalled the expert team’s report of findings after their visit to Wuhan.

“It concluded that lab leak is extremely unlikely, and recommended conducting further research around earlier cases globally and further understanding the role of cold chains and frozen foods in the transmission of the virus,” he said.

“The conclusions and recommendations of the report should be respected and upheld, and fully reflected in the work of the next phase origins study.”

Zhao said China was “concerned about certain countries’ politicization of the issue” and hoped the WHO would “adhere to the spirit of science, professionalism and objectivity.”

He did not answer directly when asked if the authorities would allow a second phase investigation to take place inside China, but said relevant experts were examining Tedros’ proposals.

The Chinese Communist Party paper Global Times published an open letter on Monday, in which hundreds of thousands of citizens called on the WHO to investigate the U.S. Army Medical Research Institute of Infectious Diseases in Fort Detrick, Maryland.

Since as early as March last year, Zhao and his foreign ministry colleagues have been calling for the lab to be investigated, promoting unsubstantiated theories that a temporary suspension of research there in the summer of 2019 was linked to the coronavirus outbreak in Wuhan later that year.

Zhao noted during Monday’s briefing that the letter had gained the support of 750,000 Chinese citizens by mid-afternoon and that “the number of co-signers is soaring as we speak.” (The paper reported later that the figure had reached 1.3 million by Monday night).

He also observed that huanqiu.com, a Chinese-language news website affiliated with Global Times had conducted an online survey in which more than 90 percent of respondents said the next phase of the virus origin probe should take place in the United States.

“These actions initiated by the public and media in fact have raised those questions long hovering over the mind of all, which the U.S. has kept in dark,” he said, asking why the U.S. had not invited the WHO to visit Fort Detrick.

“Why can’t origins study be conducted in the U.S. just as in China?” Zhao asked.

“It has long been known to all that the U.S. is trying to engage in political manipulation and shift blame to China,” he said. “The U.S. should heed the calls of the Chinese people and the rest of the international community, and respond squarely to the open letter.”