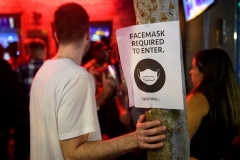 Los Angeles County has reimposed its indoor mask mandate, as seen in this photo taken on July 17, 2021, at a bar in West Hollywood. (Photo by PATRICK T. FALLON/AFP via Getty Images)

“What we’re seeing in LA County is concerning, this rise in cases. And, unfortunately, we are seeing rises, particularly among the unvaccinated, in many parts of the country now and especially given the Delta variant,” Murthy told ABC’s “This Week.”

What the CDC did in its guidance about — close to two months ago now, is based on the science, saying that your risk of getting sick or transmitting the virus was low if you were fully vaccinated. They gave communities and individuals the flexibility to make decisions about what to do with masks.

Now, in areas where there are low numbers of vaccinated people or where cases are rising, it’s very reasonable for counties to take more mitigation measures, like the mask rules that you see coming out in LA. And I anticipate that will happen in other parts of the country, too.

Should also say, Martha, that for individuals as well, depending on their circumstances, some people may choose to continue wearing masks such as those who may be immuno-compromised or people who have those — family members at home who are unvaccinated.

So people can make these decisions. Counties certainly have the right to put mitigation measures back in place, and that’s not contradictory to the guidance the CDC has issued.

He noted that more than 160 million people in this country are now fully vaccinated, and while a small number of them may experience “breakthrough” COVID infections, the infection in those cases is likely to be asymptomatic or very mild.

“And that’s really good news that continues to tell us that these vaccines are highly effective, and that’s one of the reasons we are recommending them for people across the country.”

Asked about his personal experience, Murthy told CNN’s “State of the Union” that his two children are too young to be eligible for the vaccine.

So, if I’m in an area where I think there may be a lot of folks who are unvaccinated, out of an abundance of caution, I will wear my mask in indoor settings. I don’t wear my mask when I’m outdoors.

And when I’m in settings where I’m with people who are fully vaccinated, I don’t wear a mask either. And that’s my personal choice based on my individual circumstances at home and based on the fact that I spend a fair amount of time in parts of the country where there is a substantial amount of virus circulating.

But each of us is going to make our own decision here, based on our risk tolerance, based on our home circumstances, based on what’s happening in our neighborhood and our county.

Murthy said some people, even those who are fully vaccinated, “may choose to be more cautious” in terms of mask-wearing:

“We have got to realize getting back to — quote, unquote — “normal” and to what life was like pre-pandemic is going to be a process. We’re not all going to move at the same pace in terms of our comfort with going back to the way things were, whether it’s changing our mask practices or whether it’s reengaging in group settings. So it will take time.”

On “State of the Union” and other Sunday talk shows, Murthy was asked about his first advisory as Surgeon general, an advisory titled, “Confronting Health Misinformation.”

In its advisory, the Biden administration urges social media companies to “implement product design and policy changes on technology platforms to slow the spread of misinformation.” Take down or play down certain posts, in other words.

Murthy told CNN he’s spoken with a number of technology companies in recent months: “And what I have effectively said is, when we see steps that are good, that are being taken, we should acknowledge those.

And there have been some positive steps taken by these technology companies. Some of them have worked to try to up-promote accurate sources, like the CDC and other medical sources. Others have tried to reduce the prevalence of false sources in search results.

But what I have also said to them, publicly and privately, is that it’s not enough, that we’re still seeing a proliferation of misinformation online.

And here’s the key thing to remember. Health misinformation takes away our freedom and our power to make decisions for us and for our families. And that’s a problem. And this — the platforms have to recognize that they have played a major role in the increase in speed and scale with which misinformation is spreading.

Murthy said he’s “not seeing nearly enough progress” in combatting health misinformation, “and that’s one of the reasons I issued this advisory. It’s not entirely about the tech companies. I issued this advisory to call the entire country to action, recognizing there are steps all of us can take,” he said.

“Technology companies have an important role, particularly when it comes to being transparent with the public about how much misinformation is flowing on their sites. But think about individuals…Each of us has a decision that we make every time we post something on social media. And I’m asking people to pause and to see, is a source accurate? Is it coming from a scientifically credible authority? And if it’s not, or if you’re not sure, don’t share.”

Murthy told “Fox News Sunday,” “We know that about two-thirds of people who are not vaccinated either believe common myths about COVID-19 vaccination or think those myths might be true. And we’ve got to get people accurate information…because that’s what they need to make the decisions for themselves and their family.”