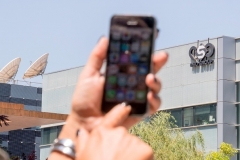 A woman uses a smartphone in front of the offices of NSO Group in Herzliya, Israel. (Photo by Jack Guez/AFP via Getty Images)

(CNSNews.com) – The human rights group Amnesty International is calling for a moratorium on the export, sale, and use of surveillance technology, after a consortium of journalists reported that governments have been using private sector spyware to spy on journalists and human rights activists.

According to the investigation, Saudi Arabia, United Arab Emirates, India, Hungary, Mexico, Morocco, and Azerbaijan were among the governments that allegedly used the spyware to target individuals.

Pegasus, the software sold by the Israeli company NSO Group, reportedly installs itself onto a smart phone after the user unwittingly clicks on a link, then provides the hacker with the contents of the phone, as well as the ability to operate the phone’s camera and microphone remotely, without being detected.

Amnesty International and the Paris-based non-profit organization Forbidden Stories were involved in the investigation, with media outlets including the Washington Post, the Guardian in Britain, France’s Le Monde and Ha’aretz in Israel.

It found that among the hacking targets was a freelance Mexican journalist, Cecilio Pineda Birto, who reported on crime and corruption before being shot dead by apparent hitmen in 2017

Others targeted included a fiancée and a former wife of Jamal Khashoggi, the exiled Saudi writer murdered in the Saudi Consulate in Istanbul in 2018. The U.S. Senate in a unanimous resolution declared Saudi crown prince Mohammed bin Salman to be “responsible for the murder” of Khashoggi, a critic of the Saudi government and royal family.

Analysis of a leaked list of phone numbers of potential targets found they included politicians, rights activists, business executives, and at least 25 Mexican journalists, more than 40 in Azerbaijan, and at least 40 in India.

Outlets involved in the consortium are planning reports over the coming days that will reveal names of some of the targets.

“Clearly, their actions pose larger questions about the wholesale lack of regulation that has created a wild west of rampant abusive targeting of activists and journalists,” Callamard charged.

“Until this company and the industry as a whole can show it is capable of respecting human rights, there must be an immediate moratorium on the export, sale, transfer and use of surveillance technology.”

NSO, which faces several lawsuits over its activities including those at the center of the latest investigation, says its spyware is sold only to law enforcement and intelligence agencies of “vetted governments” for tracking down terrorists and criminals.

“NSO does not operate the system and has no visibility to the data,” it said in a statement on Sunday.

“Our technologies are being used every day to break up pedophilia rings, sex and drug-trafficking rings, locate missing and kidnapped children, locate survivors trapped under collapsed buildings, and protect airspace against disruptive penetration by dangerous drones.”

“Simply put, NSO Group is on a life-saving mission, and the company will faithfully execute this mission undeterred, despite any and all continued attempts to discredit it on false grounds.”

The company also said it had previously investigated claims that its technology was linked to Khashoggi’s murder and found they were not valid.

“We can confirm that our technology was not used to listen, monitor, track, or collect information regarding him or his family members mentioned in the inquiry.”

“There is nothing to suggest NSO’s customers did not also use Pegasus in terrorism and crime investigations, and the consortium also found numbers in the data belonging to suspected criminals,” the Guardian reported.

“However, the broad array of numbers in the list belonging to people who seemingly have no connection to criminality suggests some NSO clients are breaching their contracts with the company, spying on pro-democracy activists and journalists investigating corruption, as well as political opponents and government critics.”

The paper said that the Indian, Moroccan, Hungarian, and Rwandan governments denied having used the spyware to hack individuals, but the other governments had not responded to the consortium’s requests for comment.