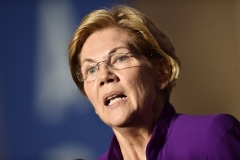 (CNS News) — Sen. Elizabeth Warren (D-Mass.) said public schools and colleges “have a right and a responsibility” to mandate COVID-19 vaccines, when questioned on the subject.

At the U.S. Capitol on Wednesday, CNS News asked the senator, “Should public schools and colleges be able to mandate that students be vaccinated for Covid-19?”

“I think they have a right and a responsibility to ensure the safety of the people on their campuses and that has traditionally been the case,” said Warren.

“They have long required vaccinations for other illnesses and threats, and I believe they have the right to do that with Covid,” she continued.

A number of universities have announced their plans to require student vaccinations for the upcoming school year, including Virginia Tech and The University of Colorado. They allow exemptions based on medical condition or religious beliefs.

However, according to Virginia Tech’s Frequently Asked Questions, the religious exemption form must be notarized and Virginia’s state health commissioner reserves the right to exclude you from university activity, if there are any perceived emergencies.