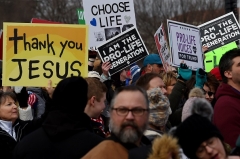 Pro-life demonstrators take part in the 47th annual “March for Life” in Washington on January 24, 2020. (Photo by OLIVIER DOULIERY/AFP via Getty Images)

The Hyde Amendment, which became law in 1976, bars the use of taxpayer funds to pay for abortion except to save the mother’s life or in cases of incest or rape.

The appropriations bill passed through committee on a 33-25 vote on Thursday and now goes to the full House, where some 200 Republicans already have pledged to vote against it.

Committee member Tom Cole (R-Okla.), who introduced the measure this year, said repeal of the “longstanding, bipartisan” Hyde Amendment is an “outrageous move” that “doesn’t reflect the views held by the majority of Americans who oppose publicly-funded abortions.”

Many other Republicans tweeted their disgust.

During the markup, Cole told the committee, “My amendment is simple.”

It restores the language carried in this bill for over 45 years that protects life and prevents federal taxpayer-funded abortions. Since it was first enacted in 1976, it is estimated that this provision – known as the Hyde Amendment after its original author, the late Congressman Henry Hyde – has saved more than two million lives.

This language has been supported by lawmakers and signed into law by presidents of both parties every year as part of the appropriations process. And every Democratic member sitting in this room today has voted for it in the past, as recently as last December.

When President Biden was serving in the United States Senate, he supported including the amendment in appropriations bills and showed support for the provision as recently as just two years ago while campaigning for president. He has since flip-flopped on this issue, under pressure from the far-left that controls the Democratic party in this area, and proposed removal of the protection in his budget request.

But this bill goes even further than just forcing American taxpayers to foot the bill for abortion on demand. This bill also deletes conscience protection language added 16 years ago by then-Congressman Dave Weldon. That language protects American doctors, nurses and other health care professionals from participating in or providing an abortion if they have a moral objection.

This is an essential right of every American and its removal is a danger to us all. I want to point out that even President Biden’s left-leaning budget did not propose removal of this important language.

Cole noted that even among Americans who support abortion, “most don’t believe tax dollars should be used for abortion. In fact, 60 percent of Americans oppose taxpayer funding for abortion,” he said.

Cole said scrapping the Hyde Amendment is another “overreach” by the far-left:

“But it also threatens to destabilize the entire appropriations process because this bill will never become law if this language is not included. Democrats in Congress simply do not have the majorities capable of passing this bill without Republican votes.

“The United States Senate will never pass this bill without the Hyde language. And 200 Republicans have already signed a letter to congressional leadership earlier this year, pledging to oppose any federal government funding bill that would weaken or eliminate longstanding pro-life protections.”

Because the Hyde Amendment bars most Medicaid abortions, some on the left call it “racist” and “discriminatory.”

For example, the Guttmacher Institute tweeted, “For decades, the harm of the #HydeAmendment and other abortion coverage bans has fallen hardest on Black, Indigenous and other people of color working to make ends meet. Ending Hyde is a matter of economic and racial justice.”

The Hyde Amendment survived a Supreme Court challenge in 1980, when the justices ruled that states participating in the Medicaid program were not obligated to fund medically necessary abortions.

House Minority Leader Kevin McCarthy tweeted on Thursday: “Democrats just voted to allow taxpayer-funding of abortions and force health workers to participate. For 44 years, both parties have agreed the Hyde Amendment is the law of the land. Today the Democrat Party has shown just how radical they have become.”

Senate Minority Leader Mitch McConnell (R-Ky.), in a Thursday floor speech, said, “Senate Republicans are going to continue standing up for life, standing up for taxpayers, and standing up for the conscience rights of millions of Americans who don’t want the government laundering their hard-earned money to abortion providers.

“Republicans will still stand with the majority of the American people, even if our colleagues across the aisle have given in to the most radical voices.”