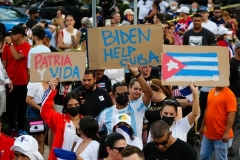 Protesters demonstrate in Miami on Sunday in support of the people of Cuba. (Photo by Eva Marie Uzcategui/AFP via Getty Images)

(CNSNews.com) –  Four days after making his first public comments about protests that erupted in Cuba on Sunday, President Biden on Thursday said in response to a question on Cuba that “communism is a failed system.”

Some Republicans have been critical of the administration’s statements about the situation on the island, and in particular what some saw as an avoidance of mentioning the ideology of the regime in Havana.

After several days of the administration using the term “authoritarian” to describe the regime, White House press secretary Jen Psaki on Thursday – when asked at a briefing about the possibility that Cubans are protesting “because they are sick of communism” – used that word.

“Communism is a failed ideology, and we certainly believe that,” she said. “It has failed the people of Cuba. They deserve freedom.”

Hours later, a reporter in the East Room asked Biden about Cuba.

“Today, your press secretary said that communism is a ‘failed ideology.’ I assume that’s your view,” said CBS News’ Steve Portnoy. “I was wondering if you could also give us your view on socialism.”

“Let me start off by answering the question relative to Haiti and Cuba,” Biden replied. “And communism is a failed system – a universally failed system. And I don’t see socialism as a very useful substitute, but that’s another story.”

“Cuba is a – unfortunately, a failed state and repressing their citizens,” he added.

(Portnoy also put a question to Biden’s guest, German Chancellor Angela Merkel, although not about communism. Merkel in Germany’s first chancellor since reunification to have grown up under communism. East Germany was a communist police state and Soviet ally from the late 1940s until 1990.)

Given the increasing visibility within today’s congressional Democratic Party of “democratic socialists,” the Biden administration’s response to the turmoil in Cuba has been closely watched – and criticized.

Thousands of Cubans, many mobilized by social media, took to the streets of a number of towns and cities on Sunday, shouting slogans including “Freedom!” and “Down with the dictatorship!” 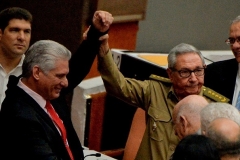 Regime leaders accused the U.S. of stoking the protests, and called for “revolutionaries” to fight in the streets. Dozens have been detained and Internet restrictions put in place. At least one protestor was killed, in clashes with police in a Havana suburb on Monday, according to regime authorities.

The first public response to Sunday’s events by a ranking administration official came that day from Julie Chung, acting assistant secretary in the State Department’s Bureau of Western Hemisphere Affairs, who tweeted “Peaceful protests are growing in Cuba as the Cuban people exercise their right to peaceful assembly to express concern about rising COVID cases/deaths & medicine shortages.”

That drew sharp reaction on the platform, notably from Sen. Marco Rubio (R-Fla.), who asked why is was “so hard” for administration officials to recognize that it was 62 years of “socialism, lies, tyranny & misery” that Cubans were protesting.

It wasn’t until Monday that Biden and Secretary of State Antony Blinken spoke publicly about the events, both using the word “authoritarian” to describe the regime.

Rubio that night noted that Biden had “finally said something,” but pointed out that the president had “still left out the word ‘Marxist’ and ‘communist’ and ‘socialist.’”

“I don’t know why it’s so hard for them to criticize Marxists.”

Also on Monday, Psaki said during a briefing the Cuban protesters were “exhausted with the Cuban government’s economic mismanagement and repression.”

“Why is it that yesterday the State Department was saying that this was all happening out of concern about rising COVID cases?” she was asked.

“Well, I would say first that the protests were just happening yesterday,” she said. “We’re still assessing what is motivating and, of course, is driving all of the individuals who came to the streets.”

“But we know that when I – we say ‘exhaustion,’ the – the manner by which the people of Cuba are governed, that can cover a range of issues, whether it’s economic suppression; media suppression; lack of access to health and medical supplies, including vaccines,” Psaki continued.

“There are a range of reasons and voices we’re hearing from people on the ground who are protesting.”

Two days later, Psaki was asked if the administration thinks Cubans wanting to leave the island are doing so “because they don’t like communism.”

“I think we’ve been pretty clear that we think people are leaving Cuba – or not – leaving Cuba or protesting in the streets as well, because they are opposed to the oppression, to the mismanagement of the government in the country.”

“We stand with the Cuban people in their call for freedom from both the pandemic and from decades of oppression and economic suffering to which they have been subjected by Cuba’s authoritarian regime.”

Former President Trump in a statement Monday expressed support for the Cuban people, saying that “Joe Biden MUST stand up to the Communist regime or – history will remember.”

On Thursday, he weighed in with another statement, contrasting his policies towards Cuba, as well as socialist-ruled Venezuela and Nicaragua, to those of his successor.

“The Biden Administration’s refusal to forcefully condemn Communism and the Cuban Communist Regime is a national travesty,” Trump said.

“The Biden Administration’s ludicrous suggestion that the Cubans are protesting government mismanagement – not brutal Communist oppression – is an insult to every Cuban patriot who has suffered, been imprisoned, or died in pursuit of freedom.”

“Today’s Democrat Party is so far left they can’t even take a stand against violent Communism. Many are Communists themselves!”

Rubio on Biden Administration’s Response to Cuba Protests: ‘This is About Freedom. Say It!’ (Jul. 12, 2021)