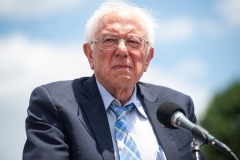 Senator Bernie Sanders (I-Vt.) is the architect of a $3.5 trillion “human” infrastructure bill, which includes most of the Democrat agenda and has zero GOP support. (Photo by SAUL LOEB/AFP via Getty Images)

(CNSNews.com) – Sen. Bernie Sanders (I-Vt.), chairman of the Budget Committee, says the $3.5 trillion “human” infrastructure bill he’s produced is “the most consequential piece of legislation for working families since the Great Depression.”

“So this is a very, very big deal, which is going to transform the lives of many millions of Americans,” Sanders told CNN’s Wolf Blitzer on Wednesday.

Sanders said the enormous package will be paid for mainly by taxing the rich (others say that won’t begin to cover the cost); and Sanders downplayed concerns about rising inflation:

Blitzer told Sanders that the “fear of inflation” is hovering over the massive spending packages emerging from the Democrat-run Congress:

“Inflation is a really serious problem, not so much for the rich, but for the middle class and the poor,” Blitzer said. “If gasoline costs $4 a gallon or $5 a gallon, rich people don’t care, but middle-class people do care. How concerned are you right now, Senator, about inflation?”

“Well, I am concerned about inflation, among many other things,” Sanders said.

As I think you know, this bill, this $3.5 trillion, and then there’s another $600 billion in a so-called bipartisan infrastructure bill, will pay for itself. It will be paid for in a variety of ways, but significantly by higher taxes on the wealthy and large corporations. So that should not add to the inflation concerns.”

Blitzer tried again, saying that inflation “potentially is a huge problem.” He reminded Sanders that Jimmy Carter “lost his bid for his reelection as president of the United States in part because of the Iran hostage crisis, but also because inflation, high interest rates, were really devastating the U.S. at that time.”

“Well, Wolf, inflation is a real concern,” Sanders repeated. “But we should also be concerned about is that real inflation accounted for wages for many, many workers in this country has not gone up for almost 50 years. People are paying much more than they can afford for child care, for college, for health care. And this legislation begins to address those concerns.”

Later on Wednesday, Sanders told MSNBC’s Chris Hayes some of what’s in this enormous bill, which Democrats aim to pass without a single Republican vote:

Under the proposal we are bringing forth, no family in America would pay more than 7 percent of their income for child care; universal pre-K, free tuition at public colleges and universities. This legislation ends the international disgrace, Chris. We’re the only country on Earth that doesn’t provide paid family and medical leave. We’re going to end that.

We are going to deal in the most aggressive way imaginable with the housing crisis, where you’ve got 18 million families paying 50 percent of their limited incomes on housing.

We’re dealing in the other bipartisan bill with the physical infrastructure, and of course, we are making the largest investment in this country’s history in transforming our energy system away from fossil fuel to combat the existential threat of climate change, among many other provisions.

In other words, what the president has done and what we have done is said, you know what, let’s look at the crises facing working families and the planet. Let’s address those crises.

Sanders said he’s particularly excited about a provision in the bill that would spent tens of billions of dollars in a Civilian Climate Corps.

“We’re going to give hundreds and hundreds of thousands of young people who believe passionately in the need to reverse climate change the opportunity to earn good pay and get an educational benefit as well to help us combat climate change.

“So add it all together, you know what, in my view this is probably the most consequential piece of legislation since the 1930s.”

Hayes, unlike Blitzer, did not press Sanders on inflation concerns. But Hayes did note that Sen. Joe Manchin (D-W.Va.) has expressed concern about paying for the $3.5 trillion bill.

Also See:
Ex-OMB Director Mulvaney on Dems’ $3.5T Bill: ‘If Anything Passes, It will Be Unpaid For’