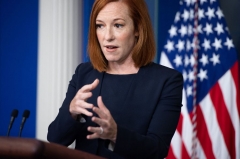 (CNSNews.com) – White House Press Secretary Jen Psaki defended Secretary of State Antony Blinken inviting UN experts to the United States to investigate systemic racism in the United States by saying the U.S. should play a role in pushing countries to do better on human rights and system racism.

PSAKI: First I would say that the secretary put out an extensive statement on why he is holding– why he believes that we need to play a role in lifting up and pushing countries to do better on human rights, on ending systemic racism in their countries, and certainly human rights is going to be a priority for the Biden administration and for this State Department.

As the secretary said in his statement, he believes responsible nations must not shrink from scrutiny of their human rights record. Rather they should acknowledge it with the intent to improve it and also push and lift up and shine a light on other countries that need to do better, and that is the role we’re playing here from the United States.

DOOCY: But you just rattled off all these problems with Cuba. They’ve got dissenters disappearing down there. In China, they’ve got a million religious minorities in internment camps. Why are they going to come here and tell us how to improve the country?

PSAKI: I certainly don’t think that’s the format of the event, but lifting up and elevating human rights, systemic racism, the steps that have been taken, the poor treatment of Uighurs as I think you’re referencing here in China, and pushing other countries with a spotlight on them to do better is certainly a role we can play from the United States.