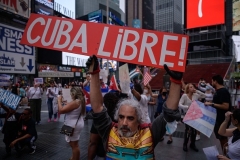 Demonstrators in New York rally held in solidarity with anti-government protests in Cuba on July 13, 2021. (Photo by ED JONES/AFP via Getty Images)

(CNSNews.com) –  In a stern message to Cubans this week — much sterner than the administration’s messages to Central Americans — Homeland Security Secretary Alejandro Mayorkas said, “Allow me to be clear, if you take to the sea, you will not come to the United States.”

On Thursday, Mayorkas said if Cubans attempt to make the trip, “people will be returned.”

CNN’s John Berman noted that Mayorkas came to the United States from Cuba in 1960 with his family, fleeing the Castro regime. “Is it fair to tell the people in Cuba and Haiti right now who want to flee, you know, dangerous situations, not to do so?” Berman asked.

It’s a very important humanitarian message. It is a long-standing message from the United States. And the reality of it is that when people take to the sea, they put their lives in tremendous peril. Just in the last few weeks, we have seen approximately 20 people lose their lives by taking to the sea. It is extraordinarily dangerous. It is not worth the risk.

And consistent with long-standing practice, people will be returned. One cannot take to the sea and come to the United States. It won’t work. And it is extraordinarily dangerous.

Berman followed up, “So you will return them to Cuba if they leave on a boat from Cuba?”

“That is correct,” Mayorkas said. “And if they have a well-founded fear of persecution or torture, they are resettled in a third country. They are not resettled in the United States.

“And so, an effort to take to the seas, imperil one’s life to come to the United States specifically, will not work. And that is an incredibly important humanitarian message.”

Notably, Cuban-Americans living in Florida tend to vote Republican. Poor, uneducated migrants from south of the border tend to be viewed as potential future Democrat voters.

And just looking at the numbers, it’s clear the Biden administration is not trying to slow the influx from Mexico and Central America.

The number of foreigners flooding across the border may even increase in the weeks ahead, if the Biden administration lifts the COVID-induced travel ban that allows some illegal aliens to be turned away.

“So, that is something that we are looking at very carefully,” Mayorkas said. “It expires on the 21st of this month. And what we do is we look at the data. We look at the science, the arc of the pandemic and make a public health determination as to whether or not to continue with the travel restrictions or to ease them in some regard in the best interests of the American public.”

Berman asked Mayorkas why people “aren’t getting the message you’re sending about not coming to the United States?”

“Well, regrettably, the smugglers are also exploiting the vulnerability of the individuals, individuals who flee economic desperation, violence. And so we are trying to counter that narrative, and we’re working very closely with the countries of origin.

“I was in Guatemala, but last week, to speak with the officials, including the president of Guatemala to address irregular migration. And we are receiving the increasing cooperation of those countries in addressing this issue.”

He did not elaborate.

The Biden administration has reversed President Trump’s remain-in-Mexico policy and stopped building Trump’s border wall, signaling that this is a good opportunity for people from all over the world to come to the United States illegally — despite the administration’s protestations to the contrary.