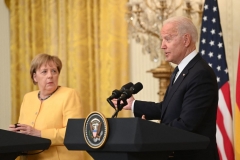 (CNSNews.com) – President Joe Biden echoed the sentiments of White House Press Secretary Jen Psaki Thursday, by saying that “communism is a failed system” and he doesn’t “see socialism as a very useful substitute.”

“When it comes to Cuba, what is your current thinking on American sanctions toward Cuba and the embargo? And today your press secretary said that communism is a failed ideology. I assume that’s your view. I was wondering if you could also give us your view on socialism,” CBS News Radio White House Correspondent and the newly elected president of the White House Correspondents Association Steven Portnoy also asked Biden during a joint press conference with German Chancellor Angela Merkel.

“Obviously I know why they elected you president. Let me start off by answering the question relative to Haiti and Cuba, and communism is a failed system, universally failed system, and I don’t see socialism as a very useful substitute, but that’s another story,” Biden said.

“With regard to whether the circumstances in which we would send military troops to Haiti, we’re only sending American Marines to our embassy to make sure they are secure, and nothing is out of whack at all, but the idea of sending American forces into Haiti is not on the agenda at this moment. Number one,” the president said.

“Number two, with regard to Cuba. Cuba is unfortunately a failed state and repressing their citizens. There are a number of things that we would consider doing to help the people of Cuba, but that would require a different circumstance or a guarantee that they would not be taken advantage of by the government,” he said.

“For example, the ability to send remittances back to Cuba. I would not do that now, because the fact is it’s highly likely that the regime would confiscate those remittances or big chunks of it,” Biden said.

“With regard to they need COVID– I mean, excuse me, they have a COVID problem in Cuba, I’d be prepared to give significant amounts of vaccine if in fact I was ensured an international organization would administer those vaccines and do it in a way that average citizens would have access to those vaccines, and one of the things that you did not ask but we’re considering is they’ve cut off access to the Internet,” he said.

“We’re considering whether we have the technological ability to reinstate that access,” the president said.