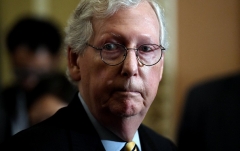 He noted that states such as Texas and Georgia are expanding voting options, including some that were brand new in 2020 because of the pandemic. And unlike Democrats, who engage in “silly hysterics,” McConnell gave examples of what the states of Georgia and Texas are either doing or trying to do:

“This spring the State of Georgia passed a mainstream election law that expanded early voting and made drop boxes permanent for the first time,” McConnell said:

The Left responded with a total meltdown. Regulations that left Georgia with more flexible early voting and more flexible absentee voting than many blue states, including New York, were insanely called Jim Crow 2.0. What nonsense!

Georgia Democrats scared huge corporations into promoting a moral panic that was completely and totally false. It was a shameless effort to manufacture an aura of crisis to help Democrats ram their election takeover bills through the Congress. But it didn’t work. The Senate rejected all the bad ideas in S.1, so the made-up outrage had to be cranked up even higher — even higher.

McConnell said that was accomplished by having Texas Democrats flee the state — with beer, on a private jet — to block a Texas voting bill.

Those Texas Democrats came to Washington this week “to snap selfies, bask in the limelight, and beg Senate Democrats to take over Texas elections,” McConnell said. He called their outrage “completely phony.”

McConnell said the Texas bills, now pending in a special session of the Legislature, would expand the minimum hours of early voting; make even more counties provide 12-hour days of early voting; and make it even easier for voters to fix mistakes on mail-in ballots so their votes would count.

The Texas bills would require voter ID for mail-in ballots without requiring a driver’s license number if the last four digits of one’s Social Security number was given instead. And the bills would clean up voter rolls to remove people who have died or moved away.

“This is not controversial stuff,” McConnell said. “It’s common sense.”

McConnell noted that President Biden, on Tuesday, called the Georgia law and Texas bills “the single, the most significant threat to our democracy since the civil war.”

“Really?” McConnell asked incredulously, recalling that this is the same Joe Biden who promised to bring Americans together. “What utter nonsense,” McConnell said, mentioning Biden’s comparison of the state voting measures to Jim Crow. “It would be laugh-out-loud funny if it wasn’t so completely and totally irresponsible,” he said.

Then McConnell explained “the great sins of the Texas proposals.”

Texas, he said, wants to “wind down a few emergency COVID voting procedures, including drive-thru voting and polling places that are open all night long.”

He questioned how eliminating those new-last-year procedures is an “assault on democracy.”

McConnell said Democrats insist that exceptions made for the pandemic should now be “sacred pillars of our system.” Yet Democrats oppose voter ID protections, which are supported by a majority of Americans.

Democrats are intent on a “power grab,” McConnell said, and that explains their “melodramatic” insistence on passing federal voting legislation:

Americans want to make it easy to vote but hard to cheat. Americans know that having widespread and accessible voting along with voter ID isn’t an attack on democracy. It’s the definition of democracy.

So look, I understand the Democrats may be growing nervous about the 2022 elections. I can see why. Liberal policies are over-spending, over-borrowing, and hurting our economy. They’re destabilizing the Middle East, weakening our southern border, and increasing violent crime across our country.

But, Mr. President, the solution is not to keep lying to the American people about the health — the health of our democracy. The answer is not this desperate craving for an unprecedented partisan takeover so Washington Democrats can appoint themselves the board of elections for every county and state.