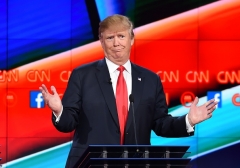 (CNSNews.com) – In a statement released on Sunday, former President Donald Trump took credit for the ratings plunge at CNN and MSNBC: “I am proud to inform you that the Lamestream Media has hit the lowest approval ratings ever recorded. I think it would be fair to assume that I had something to do with that.”

Earlier on Sunday, Trump told “Sunday Morning Futures” that if he does run for president — and he hinted that he will — he thinks the anti-Trump cable networks will “come out and endorse me.”

Host Maria Bartiromo asked Trump if he plans to run for president again:

“And, look, I look at cable ratings. I look at the ratings of CNN. They’re down 79 percent. MSDNC is down 64 percent. I mean, what’s going on? I think they’re going to come out and endorse me. They will endorse Donald Trump pretty soon, I think.”

(For the record, Trump won 70 percent of the vote in a presidential straw poll conducted over the weekend at the Conservative Political Action Conference in Dallas. Florida Gov. Ron DeSantis was a distant second at 21 percent.)

In his statement, released Sunday afternoon, Trump returned to the “lamestream media.”

“They are not only dishonest and corrupt,” he wrote, “they are truly, according to a recent poll, the enemy of the people. In a similar category, CNN’s ratings are down a whopping, and record-setting, 79% and likewise, horrible numbers at MSDNC (Joe Scarborough and his lovely wife, Mika, are at record lows). These developments are great news for the American People!”

Although ratings dropped for all the big cable news networks, Fox easily led MSNBC and CNN in the Nielsen ratings in both June and for the second quarter.