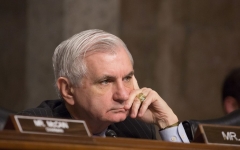 Reed said he disagreed with the assertion that the war in Afghanistan is “ending in crushing defeat.”

“It’s not accurate. The purpose that we went into Afghanistan for was to degrade and disrupt al Qaeda, to limit their ability to project the attacks outside of Afghanistan. To a great degree, we’ve done that, but the job’s not over,” the senator said.

“This is not a closure, this is a transition. We have to maintain continual involvement, both with the Afghan government by supporting them financially. Also, providing the kind of technical assistance they need for their air force and other elements, but I think the president was presented with a bad series of choices,” Reed said.

“The Trump administration had said we were leaving by May 1. The Taliban had no real responsibilities in that agreement, none that they carried out that I can see, and yet, that date I think would have prompted an incredible increase of violence directed against the United States. So, I think the president made a difficult, but the best of many poor choices,” he said.

Reed said he didn’t make an empty promise to Afghan leadership when he traveled to the country in 2002, because “some of the factors that we have to consider is that in 2002, we were prepared, and we had a permissive situation.”

“We had destroyed the Taliban. One of the critical strategic mistakes was the pivot to Iraq, which I opposed, and one reason I opposed it is I thought it would eventually lead to compromising our resources and our attention to Afghanistan, and it did. We’ve tried to resuscitate that approach to Afghanistan over several surges. They have not been successful, and 20 years of effort and thousands of American lives I don’t think represents a shallow promise in 2002,” he said.

When asked whether there would have been support in Congress for a stabilizing force in Afghanistan perhaps at Bagram Air Base for an undetermined amount of time, Reed said, “Perhaps, but I don’t think there was an overwhelming sense in the Congress that we should stay.

“I think the reaction to the departure has been one of generally acceptance. I think the other factor that should be considered is that, as long as the Taliban had a safe haven, which they do in Pakistan, they would continue to flow in, put pressure on,” the senator said.

“We could hold them, perhaps, at bay, but I think at this juncture, the president decided any type of increase in forces, increase in presence would be in the long term, ineffective, and 2,500 personnel is not exactly a decisive force to have, particularly if the Taliban continues to gain strength,” he said.