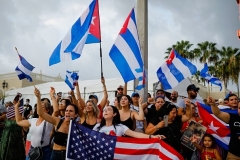 People holding Cuban and US flags protest the Cuban government in Miami, on July 12, 2021. (Photo by EVA MARIE UZCATEGUI/AFP via Getty Images)

(CNSNews.com) – “I don’t know why it’s so hard for them to criticize Marxists,” Sen. Marco Rubio (R-Fla.) said on Monday, after President Joe Biden finally spoke about the street protests and “authoritarian regime” in Cuba.

Biden, at the beginning of meeting on big-city crime, told the gathering on Monday afternoon:

I want to start by recognize the remarkable protests that are taking place in Cuba. The Cuban people are demanding their freedom from an authoritarian regime. And I don’t think we’ve seen anything like this protest in a long, long time. If–if, quite frankly, ever.

Rubio noted that Biden took a full day to “finally” say something about the anti-government protests.

“He finally said something. He still left out the word ‘Marxist’ and ‘communist’ and ‘socialist,’ Rubio told Fox News’s Sean Hannity:

Socialism is about control, about controlling people and every aspect of their lives. And the passion you see in the streets of Miami tonight and in other parts of Florida and the country is people that suffered under that evil, saw their families divided, their lives destroyed, their kids have to go overseas, people never saw their parents before they died because of evil.

That’s what Marxism is, and I wish we had a president and more leaders in Congress on the Democratic side of the aisle — we have a few, but not enough — willing to say that.

Rubio told Hannity there are four things the United States could do to help Cubans achieve the liberty and freedom they want:

First of all, make it very clear whose side we are on here, okay? And why they’re doing this. People are in the street because they want liberty from Marxism, and we’re with them.

Number two, make abundantly clear to the regime in Cuba that the Trump policies aren’t going to change, because that’s what they are hoping is going to come out of this. Well, you see how bad things are here, if only you guys would lift the embargo, if only you guys would ease sanctions, maybe things would be better for the people of Cuba. Come out right now and say it, we are done with our review, we are keeping the Trump policies that allow the military to enrich itself at the expense of the people.

Number three, make it the top priority of the U.S. government to provide Internet access, using satellite technology or whatever we can get our hands on so the people of Cuba can speak to each other and show the world what’s happening inside of Cuba.

And the fourth thing that I would do is, I would make it abundantly clear to the Castro regime that if you guys threaten us with a mass migration, or if you encourage a mass migration, like Mariel, like the rafter crisis of ’94, that is an act of hostility against the United States, and we will act accordingly. Those four things have to come across.