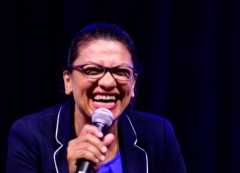 Rep. Rashida Tlaib (D.-Mich.) sent out a tweet on Monday saying that the “simple desire to live is criminalized” in Israel.

Tlaib was reacting to the death of Suha Jarrar, a Palestinian woman whose mother, Khalida, has been imprisoned in Israel.

“The simple desire to live is criminalized in some of the most inhumane ways in Israel,” Tlaib said in her tweet. “Like not allowing a mother to truly mourn the loss of her daughter.

“Suha’s death is heartbreaking,” said Tlaib. Khalida & her family have gone through so much already.”

Tlaib’s tweet linked to a story that Haaretz published in 2015 about an Israeli prison officer who had allowed Suha and her sister, Yafa, to hug their mother in court.

Here is an excerpt from the Haaretz article:

“It was a one-of-a-kind moment of grace, humanity and compassion in the dominion of injustice and evil known as the military court of Judea, in the West Bank. In a spontaneous decision, Israel Prison Service officer Bassem Kashkush allowed Yafa and Suha Jarrar to approach their mother, Khalida, and embrace her. Even the elders of the court can’t remember anything like it.

“The young women walked up to their mother, hugged her long and hard, and the tears flowed unbidden. Mother and daughters cried; the husband and father, Ghassan Jarrar, wept bitterly. The sympathizers and international observers who are attending Jarrar’s trial cried, too, and a tear was even spotted in a female prison guard’s eye. “What’s this, is everyone crying here today?” she blurted out.

“Twenty-nine-year-old Yafa hasn’t seen her mother for about a year, and her sister, Suha, 24, for about six months. Last week they arrived from Canada for a vacation. They are both graduate students, Yafa working toward a doctorate in law, Suha about to begin her Ph.D. in environmental studies, and this week they had an emotional reunion with their mother in court. Unlike in previous hearings, Jarrar was brought to the courtroom without iron shackles on her feet.

“Khalida Jarrar, a member of the Palestinian Legislative Council, has been in detention for almost three months. At first she was in administrative detention, as Israeli authorities had no intention of putting her on trial. But after a wave of international protest, she was remanded in custody until the conclusion of legal proceedings against her and indicted on 12 counts – all of them saliently political – which include such ludicrous charges as attending a book fair and visiting a released prisoner in his home. Her trial began this week in the Ofer military prison courtroom.”

“The daughter of the iconic PFLP leader Khalida Jarrar, Suha Ghassan Jarrar, who was found dead near a medical complex in Ramallah, died of natural causes, her family said in a statement.

“The Jarrar family said the initial diagnosis indicates that the cause of death was a severe heart attack, noting that she was ill and had experienced minor symptoms in the past.”