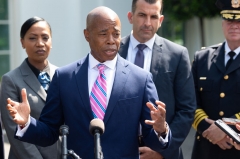 Brooklyn Borough President and New York City mayoral candidate Eric Adams (C) speaks to the media alongside other local and law enforcement officials outside the West Wing of the White House in Washington, DC, July 12, 2021, after attending a meeting with US President Joe Biden about reducing gun violence. (Photo by SAUL LOEB/AFP via Getty Images)

(CNSNews.com) – New York City mayoral candidate Eric Adams said Monday that he did well among voters in less affluent, more crime-ridden neighborhoods, because “when you communicate with people who are closest to the problem, they know when they hear someone that’s closest to the solutions.”

“It went well, and I was really excited with his, just his energy, and as you know, Anderson, this is something I have been talking about for so long. Just to see the chief executive, the commander in chief finally realize how important it is that we deal with the issues of gun violence, handgun violence that is really saturating the inner cities,” he told CNN’s “Anderson Cooper 360.”

Host Anderson Cooper pointed out that Adams ran on being tough on crime and did very well in parts of New York that were less affluent and known for more crime than he did in liberal affluent Manhattan.

When asked what this says about the priorities of Democratic voters, Adams said, “So true, and when you communicate with people who are closest to the problem, they know when they hear someone that’s closest to the solutions.

“And an analysis of those votes show you, those areas who are dealing with poverty, high crime, lack of adequate education, high unemployment, it’s clear that they heard something in my voice and in my tone, and then they looked at my life – a person who was arrested and beat by police officers, who lost friends to violence during the mid- ’80s, going on to become a police officer, fighting for reform,” he said.

“They heard and saw that I lived a life that many New Yorkers are living, and they said, this is the person we want to lead us into the next four years,” said Adams, who serves as Brooklyn borough president.

“Do you think there’s a lesson in your primary victory for Democrats nationwide? I mean, you don’t hear a lot of Progressive Democrats, you know, talking about policing in the way that you did,” Anderson said.

“Well, you know what it is? We’ve allowed, I believe, the numerical minority of the party to hijack the entire conversation, and when you engage in real talk with real New Yorkers, you’ll find what people are saying the loudest is not what the majority of Democrats want, and it doesn’t mean that we don’t want to hear voices from all ends of the party so we can come to  a real solution to the problems we are facing, but to not deal with those issues that I like the say the kitchen table, the bread and butter issues is a big mistake,” Adams said.

“People want safe streets. They want our children educated. They want a real issue around housing, and they want us to be pragmatic as we approach these things. I consider myself to be a Progressive, but I don’t want to only close Rikers Island, I want to close the pipeline that feeds Rikers Island, and you do it by being a more proactive and just not, just reactive,” he said.

Anderson pointed out that Adams considers himself the face of the new Democratic Party. He asked what that party looks like to Adams and what his message is to other Democrats.

“Well, there’s a party where we embrace proper policing, where we talk about making sure that we redefine the ecosystem of public safety. Define the role of police officers in that ecosystem, and then make sure our officers are doing the job that they’re supposed to do — go after violent offenders and criminals,” Adams said.

“They shouldn’t be dealing with mental health individuals who are experiencing mental health crises unless it’s a dangerous situation. Our police officers should be focused on not doing clerical duties but being on patrol. But we want to have the trust back in policing and back in the communities they serve, and then most importantly we want to become more proactive and not reactive,” the mayoral candidate said.

“Fighting crime is both intervention and prevention. Many people talk only about the preventive aspect of it, but we must deal with the crime that we’re facing now and many of my colleagues throughout this country, they were reluctant to talk about it and even in the city of New York, they were reluctant to talk about the crime that we were facing on the streets, and I refuse to do so. Anderson, my son won’t grow up in a city I grew up in filled with crime, graffiti, and violence. That is unacceptable,” he said.