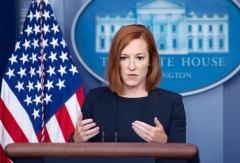 (CNSNews.com) – The White House on Monday disputed Cuban President Miguel Diaz-Canel’s accusation that the U.S. is fomenting protests in Cuba because of the embargo, leading to a lack of medicine for the Cuban people.

White House Press Secretary Jen Psaki said that the U.S. embargo on Cuba “allows humanitarian goods to reach Cuba” and that the Cuban people are fed up with the “economic mismanagement” and “repression.”

Furthermore, she said, “The United States regularly authorizes the export of agricultural products, medicine, medical equipment, and humanitarian goods to Cuba — and, since 1992, has authorized the export of billions of dollars of those goods to Cuba. So that’s simply inaccurate in terms of the facts that are stated.

When asked why President Joe Biden hasn’t undone some of the things that former President Donald Trump did to overturn the overtures made by former President Barack Obama, and whether Cuba is on the list to get vaccines from the United States, Psaki noted that Cuba has not joined COVAX, the World Health Organization’s attempt to “accelerate the development and manufacture of COVID-19 vaccines and to guarantee fair and equitable access for every country in the world.”

“Well, first, let me say that we have actually provided, over the course of the last several months, a great deal of assistance to Cuba.  I just want to note this because I think it’s important for people to understand. Since, FY- since 2009, which is quite some time ago, Congress has directed $20 million in democracy assistance annually, but even if you look at last year: Last year alone, the U.S. exported $176 million of goods to Cuba,” she said.

“In the first six months of 2021, Cuba imported $123 million worth of chicken from the United States — just as an example. Obviously, one of the issues that the ind- — that protesters are justifiably out there in the streets protesting about is hunger, is lack of access to vaccines, et cetera, but we are continuing to provide a range of assistance, which we will continue to do,” Psaki said.

“I will say, on vaccines, one of the challenges, Jonathan, which you may be familiar with, is that Cuba has not joined COVAX and has indicated they intend to vaccinate their population using the Abdala vaccine, which they’re — the Pan American Health Organization has been out there urging Cuban scientists to publish their — their results in the peer-reviewed literature on this vaccine,” she said.

“So, in terms of — COVAX would be a mechanism that we have provided, as you all know, vaccines to a range of countries in the world. We certainly recognize and understand that access to vaccines is one of the issues that a number of individuals in the streets is voicing concern about, but we have to determine what the mechanism would be to work with the Cuban people to get vaccines to them. That’s something we’re working through,” Psaki said.

When asked to give a sense of where Biden’s policy review on Cuba is right now and whether she anticipates making any changes, the press secretary said, “Well, I will say first — and I meant to say this in response to Jonathan — but there’s every indication that yesterday’s protests were spontaneous expressions of people who are exhausted with the Cuban government’s economic mismanagement and repression, and those — these are protests inspired by the harsh reality of everyday life in Cuba, not people in another country.

“I’m saying that because I think there have been a range of accusations out there, as you well know, Jeff. In terms of our assessment of a future — our current pol- — our policy, I should say, it continues to be — our approach continues to be governed by two principles: First, support for democracy and human rights — which is going to continue to be at the core of our efforts — through empowering the Cuban people to determine their own future,” she said.

“Second, Americans, especially Cuban Americans, are the best ambassadors for freedom and prosperity in Cuba. I don’t have anything to predict for you in terms of any policy shift.  Obviously, given the protests were just happening over the last 24 to 48 hours, we’re assessing how we can be helpful directly to the people of Cuba in these circumstances,” Psaki added.