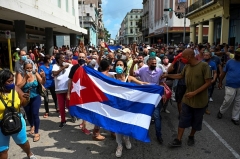 Cubans take part in a rare street protest against the regime, in Havana on Sunday. (Photo by Yamil Lage/AFP via Getty Images)

(CNSNews.com) – In an unfolding situation on the streets of Cuba, thousands of people were marching on Sunday in protest against the communist regime and economic shortages amid the coronavirus pandemic.

Cuban President Miguel Diaz-Canel appeared on national television to denounce what he called destabilization efforts from the United States.

Foreign Minister Bruno Rodriguez also charged that there was a U.S. link to the protests, describing them in a tweet as an “imperialist campaign.”

In response to the regime’s patria o muerte (“homeland or death”) slogan, Cubans who took to the streets in several cities and towns could be heard in video clips posted on social media chanting patria y vida (“homeland and life”). Other chants heard included libertad! (“freedom!”) and  Abajo la dictadura! ( “Down with the dictatorship!”)

The state news agency Prensa Latina quoted Diaz-Canel as saying that anti-Cuba groups were trying to take advantage of the hardships arising from the pandemic to promote anti-government campaigns.

He said those encouraging the demonstrations were not interested in the people’s wellbeing, but in promoting neoliberalism and the privatization of health and education.

“We will not allow any sold-out counterrevolutionary, who receives money from U.S. agencies, to provoke destabilization in Cuba,” Diaz-Canel declared.

“There are many revolutionaries in this country who are willing to give our lives, we are willing to do anything, and we will be in the streets fighting,” he warned.

Clips posted online showed people marching along Havana’s famous Malecón seaside esplanade, in small towns near the capital including Alquizar, Güira de Melena, and San Antonio de los Baños, and as far away as Palma Soriano in Santiago de Cuba province, some 450 miles to the east. An American flag could be seen being waved in one instance.

Some clips also showed Cuban troops being deployed, and in one case, policemen were seen walking with protestors in Santiago de Cuba. 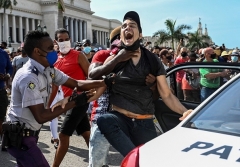 She also urged police, soldiers, and “all those Cubans who are receiving orders to repress their brothers” not to fear the people.

Sen. Marco Rubio (R-Fla.), a Cuban American, tweeted that he was asking President Biden and Secretary of State Antony Blinken “to call on members of the Cuban military to not fire on their own people.”

Rubio also posted a video message, expressing support for those on the streets, and accusing the regime of lying by blaming the U.S. for what he called an “organic grassroots movement.”

“They’re protesting tyranny. For 62 years they have lived under a tyrannical regime, one that is not only incompetent but that lies to them, that blames everything on America – even today,” he said.

“And these people have bravely taken to the streets to say, ‘enough is enough.’ They want to live in a normal country.”

Responding to the regime’s attempt to blame the U.S., Rubio said neither the U.S. nor any “other country in the world has anything to do with the fact that Cubans of every age and every region organically, on their own, took to the streets today to have their voices heard.”

Florida Gov. Ron DeSantis also weighed in on Twitter: “Florida supports the people of Cuba as they take to the streets against the tyrannical regime in Havana. The Cuban dictatorship has repressed the people of Cuba for decades & is now trying to silence those who have the courage to speak out against its disastrous policies.”

Protestors in Havana chanted “Freedom!” and “Down with the dictatorship!” (Photo by Yamil Lage/AFP via Getty Images)

Human rights activist Hillel Neuer of U.N. Watch called on U.N. secretary-general Antonio Guterres and high commissioner for human rights Michelle Bachelet to “speak out urgently and take action against the gross violations of human rights taking place today across Cuba. It’s time to stand with the victims, not with the perpetrators.”

“History will record that at the moment when the people of Cuba dared to rise up against their cruel oppressor, the United Nations chose silence.”