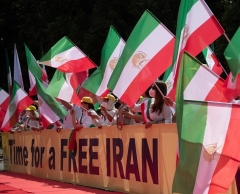 National Council of Resistance of Iran supporters rally in Berlin, Germany on Saturday, during the online Free Iran summit. (Photo by Paul Zinken/AFP via Getty Images)

Paris (CNSNews.com) – A mass gathering of members of an exiled Iranian opposition group heard calls for the United Nations to press for the international prosecution of Iranian President-elect Ebrahim Raisi, accused of participation in the extrajudicial executions of thousands of dissidents in the 1980s.

The annual “Free Iran” event, held online this year, ended on Monday. Supporters of the National Council of Resistance of Iran (NCRI)/Mujahideen-e Khalq (MEK) opposition group in more than 100 countries took part, according to the organizers.

In her address, NCRI leader Maryam Rajavi attributed the victory of Raisi – in an election tightly stage-managed by the regime – to Tehran’s fear of popular protests that have erupted across Iran in recent years, and what she called the “political demise” of supreme leader Ayatollah Ali Khamenei.

“We urge the U.N. Security Council to arrange for the international prosecution of Mullah Raisi and hold him accountable for crimes against humanity and to refuse to accept his presence at the next session of the U.N. General Assembly,” she said.

Raisi, whose most recent post was that of judiciary chief, is accused of having taken part in the extrajudicial executions of thousands of imprisoned dissidents – many of them NCRI/MEK supporters – in 1988.

He was allegedly a member of a “death panel” that oversaw the executions, in 1988, in line with a decree by then-supreme leader Ruhollah Khomeini. By some accounts tens of thousands of dissidents were executed.

Paris-based NCRI Foreign Affairs Committee official Ali Safavi said in an interview Khamenei had encouraged the election of Raisi as the only way “to contain the uprisings that have been shaking the country for years, and that increased in the last year because of the falling economy and the COVID-19 pandemic.”

Safavi said Khamenei wants to purge moderate political factions because of the crises facing the regime, including four major uprisings since 2017.

“Khamenei fears that the revolts and insurrections will continue and that’s why he wanted a man like Raisi to become president,” he said.

Safavi again disputed Tehran’s turnout figures, saying that based on reports from hundreds of towns and cities and thousands of video clips provided by dissidents inside the country, boycott calls were largely successful, and the estimated turnout was likely less than ten percent.

(The official turnout in the June 18 election was 48.4 percent, the lowest in any presidential election since the 1979 revolution.)

Raisi, who is due to take office in August, is thought to be a potential successor to Khamenei, who is 82. The current supreme leader was himself Iran’s president (1981-1989) before succeeding his mentor, Khomeini.

As usual, the Free Iran event attracted some senior Western sympathizers, including U.S., Canadian and European lawmakers and politicians.

The election of Raisi and what it means for Iran featured prominently during the three-day event, with many speakers calling for him to be prosecuted.

Former Secretary of State Mike Pompeo said the international community must continue to support Iranian people fighting for a “freer and more democratic Iran, in any way we can.”

“The purpose of opponents of the mullah regime is to have a secular, democratic and non-nuclear republic of Iran,” said Pompeo, adding that that was what U.S. lawmakers from both parties were also working for.

“For 33 years, the world has forgotten the 1988 massacre of 30,000 political prisoners,” said Slovenian Prime Minister, Janez Janša. “This must change. Especially since Amnesty International has accused Ebrahim Raisi of crimes against humanity for his role in the massacre.”

Other prominent speakers included former New York City Mayor Rudi Giuliani, former Sens. Joseph Lieberman (D-Conn.) and Robert Torricelli (D-N.J.). All called for an end to the Iranian regime and establishment of a democratic Iran with Rajavi as president.

During the virtual events, NCRI supporters from various cities in Iran – wearing masks to avoid being identified by the regime – spoke about the situations they faced and criticized Iran’s leadership.