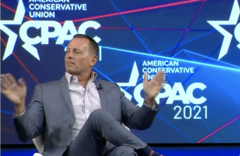 (CNSNews.com) – The 2021 Conservative Political Action Conference, which is being held this weekend in Dallas, Texas, will feature two speakers who are self-professed gays.

Former acting Director of National Intelligence Ric Grenell, who also served as ambassador to Germany, had an on-stage “conversation” with American Conservative Union President Matt Schlapp on Saturday morning. Radio talk show host Tammy Bruce will moderate a panel discussion on Sunday that is entitled “Fuel for Thought” and will look at energy policy issues.

The biography of Grenell posted on the CPAC website says: “In 2012, Grenell briefly served as Presidential Candidate Mitt Romney’s National Security and Foreign Affairs Spokesman. His appointment made him the first openly gay spokesman for a Republican Presidential candidate.”

“I can think of a better way to start the first full day of CPAC than to be with Ric Grenell,” Schlapp said when introducing Grenell.

Bruce made a Sept. 3, 2006 appearance on CSPAN, where as CSPAN put it: “She discussed her self-identification as an openly gay, pro-choice, gun owning, pro-death penalty, voted-for-President Bush progressive feminist.”

CPAC describes itself as the “most influential gathering of conservatives in the world.”

“The Conservative Political Action Conference is the largest and most influential gathering of conservatives in the world,” says its website. “Launched in 1974, CPAC brings together hundreds of conservative organizations, thousands of activists, millions of viewers and the best and brightest leaders in the world.”