A statue of Jesus Christ in Eureka Springs, Ark., was draped overnight with a sign that says: “God Bless Abortions.”

KNWA, a local Fox affiliate, published a story about the incident.

“A group of activist artists is claiming responsibility for a banner strung across the Christ of the Ozarks monument in Eureka Springs overnight on Friday.

“Guerilla art collective Indecline said in a press release that it is responsible for a “God Bless Abortions” banner hanging across the 67-foot statue of Jesus located atop Magnetic Mountain.

“The group calls the banner a piece of protest art in “direct response to the dramatic attempts being made in Arkansas and throughout the South, to ban abortion services to women in need.” 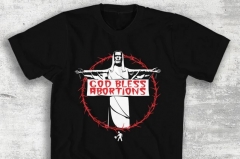 “Indecline says it was smuggled onto the mountain by a small team disguised as a construction crew and strung up before sunrise on Friday.”

On its own website, the group also offers t-shirts that say: “God Bless Abortions.”

In a FAQ section of its website, the groups says: “INDECLINE is an American Activist Collective founded in 2001. It is comprised of graffiti writers, filmmakers, photographers and full-time rebels and activists. INDECLINE focuses on social, ecological and economical injustices carried out by American and International governments, corporations and law enforcement agencies. INDECLINE is NOT an anarchist group.”