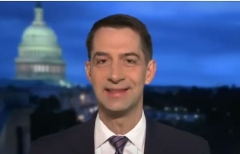 The only people Rep. Rashida Tlaib (D-Mich.) and her fellow radical Democrats want to deport and exclude from the U.S. are “Conservatives or Republicans or anyone who voted for Donald Trump,” Sen. Tom Cotton (R-Ark.) said Thursday.

In a Fox News Channel interview, Sen. Cotton was asked to react to Rep. Tlaib’s calls to defund all immigration and border enforcement. Tlaib said that “The new members of Congress are coming with full force and pushing back” against enforcement of U.S. border laws – because it’s inhumane “militarization” against “our immigrant neighbors” and “targeting communities of color.”

“They want to defund the police. They want to turn America into a sanctuary country for all illegal aliens from around the world. And, now, that logic is being extended to our border patrol and Immigrations and Customs Enforcement (ICE) – even all of DHS.”

Rep. Tlaib and most Democrats think anyone should be able to come to the U.S. and stay – except Conservatives, Republicans, and Trump voters – Sen. Cotton said:

“It would be interesting to me if Rashida Tlaib would explain exactly who she thinks should be excluded from our country when they show up at our border, irrespective of our laws – or who in America should be deported.

“I don’t know, maybe, her answer would be, ‘Conservatives or Republicans or anyone who voted for Donald Trump last year.’ But, it seems like, beyond that, Rashida Tlaib and most Democrats think that we should have totally open borders and that anyone should be able to come into this country.”

“That is a recipe for disaster,” Sen. Cotton concluded.