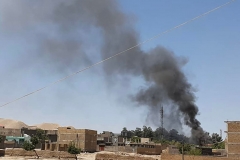 A smoke plume rises amid fighting between Afghan security forces and Taliban fighters in the western city of Qala-i-Naw, the capital of Badghis province, on July 7, 2021 (Photo by -/AFP via Getty Images)

(CNSNews.com) – Pentagon Press Secretary John Kirby says the Biden administration is “concerned about the security situation the ground,” as the Taliban expands its control of Afghanistan.

But despite the unravelling security situation, “We still believe that there’s a path forward for a negotiated settlement, a peaceful political solution to this — to this conflict. And that’s where we want everybody’s attention to be — to be squarely focused on. And, certainly, that’s ours,” Kirby told Fox News’s Neil Cavuto on Wednesday.

“From a military perspective, Neil, our focus is on completing the drawdown that we began in April, under the president’s order, and making sure that, as we do that, we transition to a new relationship with Afghan forces and the Afghan people that helps them continue to try to defend their country and defend their territory.”

Cavuto noted that the Taliban “doesn’t seem to want a peaceful negotiation,” and he asked Kirby if the 20-year war was a “waste,” since the Taliban is not even waiting for the U.S. troop withdrawal to be completed before fighting their way to power:

“I don’t think we want to get into speculating and hypotheticals here about what may or may not happen,” Kirby said.

“Again, we’re all watching the security situation with concern, which is, again, why we are putting so much diplomatic energy in this administration into trying to find a diplomatic solution and to fashioning a relationship with the Afghan forces going forward that allows them to stay competent and capable in the field. Again, we’re mindful of the situation. And it’s — and it’s concerning.

“But we — and we have — as I think you have heard me say, we have over the course of the next few months, until the drawdown is complete, we still have capabilities, and we still have the authorities to assist the Afghan forces in the field, if we need to.”

Cavuto asked what the Biden administration will do “if the Taliban gets too aggressive here?”

“Well, without speaking to specific future operations that haven’t happened yet, I mean — we want to be careful here — as I said, the commander on the ground, he will transition authority to General McKenzie, the Central Command commander, here very soon,” Kirby said:

And General McKenzie will retain those same authorities that General Miller now has in Kabul. And those authorities right now do permit for the United States to come to the assistance of Afghan National Security Forces.

And, obviously, that’s going to be a case by case situation. We’re going to have to evaluate the situation as it’s happening before we make those kinds of decisions. But we do have those authorities.

I would say, again, that we’re going to continue to assist the competency and the capability of Afghan forces going forward after the drawdown. It will include some financial support, some logistical support, some technical support, some aviation support, to include the provision addition to their aviation fleet of helicopters and aircraft.

So we’re not turning our back on our Afghan partners. We really think that there’s still space here for a negotiated settlement. And we urge the Taliban to return to the table.

And the other thing I’d say, Neil, is that, should the Taliban have governing aspirations here that they intend to force them — to force their way into, I mean, if they want to be a representative in the international community and respected in that community, they’re going to have to behave in that manner.

I mean, there’s still international community pressure that can be brought to bear.