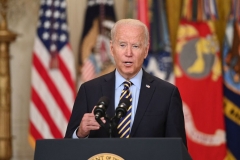 President Joe Biden speaks about the situation in Afghanistan from the East Room of the White House in Washington, DC, July 8, 2021. (Photo by SAUL LOEB/AFP via Getty Images)

(CNSNews.com) – President Joe Biden announced Thursday that the withdrawal of U.S. troops from Afghanistan will be completed by Aug. 31, but it’s not inevitable that the Taliban will take over the region, because the Afghan troops are “well-equipped” and outnumber the Taliban.

“Today I was briefed by our senior military and national security leaders on the status of the drawdown of U.S. forces and allied forces in Afghanistan. When I announced our drawdown in April, I said that we would be out by September, and we’re on track to meet that target, excuse me. Our military mission in Afghanistan will conclude on August 31st. The drawdown is proceeding in a secure and orderly way, prioritizing the safety of our troops as they depart,” he said.

“Our military commanders advised me that once I made the decision to end the war, we needed to move swiftly to conduct the main elements of the drawdown, and in this context, speed is safety, and thanks to the way in which we have managed our withdrawal, no one, no one U.S. forces or any forces have been lost. Conducting our drawdown differently would have certainly come with an increased risk of safety to our personnel,” Biden said, and “those risks were unacceptable.”

The president said the U.S. completed its objectives in Afghanistan, which was to get the terrorists who attacked the U.S. on 9/11, deliver justice to Osama bin Laden, and prevent the country from becoming a base from which terrorist attacks can be launched on the United States.

The U.S. did not go to Afghanistan to nation build, he said.

When asked whether Taliban takeover is inevitable, the president said, “ No, it is not, because you have the Afghan troops have 300,000 well-equipped, as well-equipped as any army in the world and an air force against something like 75,000 Taliban. It is not inevitable.”

When asked whether he trusts the Taliban, Biden said, “No, I do not trust the Taliban.”

Biden called the reporter’s question “silly,” but he responded, “Do I trust the Taliban? No, but I trust the capacity of the Afghan military, who is better trained, more equipped, and more competent in terms of conducting war.”

When asked whether the U.S. will be responsible for the loss of Afghan civilians that happens because of the drawdown, Biden said, “No, no, no, no. It’s up to the people of Afghanistan to decide on what government they want! Not us to impose a government on them. No country’s ever been able to do that.

“If this isn’t a mission accomplished moment, what is it?” a reporter asked.

“No, there is no mission accomplished,” Biden said. “A mission was accomplished in that we get Osama bin laden and terrorism is not emanating from that part of the world.”

When asked why the U.S. can’t evacuate Afghan translators that the U.S. military has relied on to await visa processing inside the U.S. as some immigrants at the southern border have done, Biden said, “Because the law doesn’t allow that to happen, and that’s why we are asking the Congress to consider changing the law, but in the meantime, we can guarantee their safety if they wish to leave by taking the third countries and/or while the wait is taking place, to come to — and hopefully while they are waiting there to be able to bring them back to the United States if that’s what they choose to do.”
\