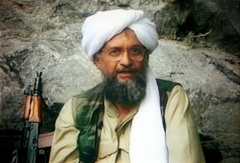 According to U.N. Security Council assessments, al-Qaeda leader Ayman al-Zawahiri is believed to be located in Afghanistan, near the Afghan-Pakistan border. (Photo by Maher Attar/Sygma via Getty Images)

(CNSNews.com) – The U.S. intelligence community assesses that the Afghanistan-based terrorist groups ISIS-K and al-Qaeda intend to attack the United States, and could have the ability to do so in as little as six months in the former case, and within “a year or two” in the latter, a senior Pentagon official told lawmakers on Tuesday.

“I think the intelligence community currently assesses that both ISIS-K and al-Qaeda have the intent to conduct external operations, including against the United States, but neither currently has the capability to do so,” undersecretary of defense for policy Colin Kahl told the Senate Armed Services Committee.

“We could see ISIS-K generate that capability in somewhere between six or twelve months. I think the current assessment by the intelligence community is that al-Qaeda would take a year or two to reconstitute that capability.”

The Joint Staff’s director of operations U.S. Army Lt. Gen. James Mingus, also testifying, said he concurred, adding that the assessment had been “refined” as recently as last week.

In response to further questioning, Kahl indicated there was little doubt that al-Qaeda and ISIS-K want to attack the United States.

“We have considerable evidence that they have the intent. The question at the moment is the capability.”

Al-Qaeda is a longstanding ally of the Taliban, the fundamentalist terrorist group that seized power in Kabul in mid-August. Chairman of the Joint Chiefs of Staff Gen. Mark Milley told the same Senate committee late last month that Taliban has “still have not broken ties with al-Qaeda.”

A former CIA acting director predicted last month that the manner of the U.S. exit and the Taliban’s victory would inspire jihadists from around the world to flock to Afghanistan.

In Tuesday’s hearing, however, Kahl opined that the Taliban was not eager to see a surge of foreign terrorist recruits enter Afghanistan to “repopulate” either al-Qaeda or ISIS-K – especially ISIS-K, which he described as “mortal enemies” of the Taliban.

“They do not have an interest in ISIS-K establishing a beach head in Afghanistan, either to destabilize Afghanistan or to conduct external operations,” he said.

Kahl said the U.S. should “continue to engage the Taliban” and hold it accountable to its commitment in the Feb. 2020 Doha agreement to not allow Afghanistan to be a haven for international terrorism.

A U.N. Security Council report in July said al-Qaeda leader Ayman al-Zawahiri was believed to be living in Afghanistan, near the border with Pakistan.

Former U.S. special envoy for Afghanistan Zalmay Khalilzad told CBS News’ “Face the Nation” last week that the Taliban officials he had engaged with “told me they did not know where he was,” although he added that it was “important not to take their word for it.”

Following the complete and chaotic withdrawal of U.S. forces at President Biden’s instructions in August, Pentagon and administration officials have said the U.S. is relying on “over-the-horizon” surveillance and counterterrorism capabilities to disrupt terrorist threats emanating from the country.

The U.S. military facilities located nearest to Afghanistan are in Qatar, a flight of some 1,500 miles if manned or unmanned aircraft avoid crossing Iranian airspace.

Kahl and Mingus said they would speak more about the “over-the-horizon” capabilities in a closed session held later in the day, but the comments they did offer made clear the U.S. has yet to conclude any agreement to operate from a country neighboring Afghanistan.

Mingus said the U.S. could “project assets from the Gulf,” gather intelligence across a range of sources, and “if necessary take action in Afghanistan.”

He acknowledged that, as Milley and U.S. Central Command commander Gen. Kenneth McKenzie had both indicated earlier, “it is harder” to respond to the terrorism threat than it was before the withdrawal.

“But we believe we have the assets in place right now if necessary to disrupt and/or degrade the terrorist networks in Afghanistan.”

Kahl said that in remaining vigilant against the terrorist threat in Afghanistan, the U.S. military needs “to build out more capabilities, so it’s not just reliant on the facilities we have in the Arabian Gulf.”

“We’re seeking to build out a more robust ecosystem for over-the-horizon CT [counterterrorism] which would include regional players,” he said. “We’re in conversations with Uzbekistan, Tajikistan and others.”

Kahl took office in late April – after a sometimes contentious confirmation process – and said several times during Tuesday’s testimony that by the time he did, Biden had already announced the decision (on April 14) to withdraw all troops from Afghanistan by September 11.

Under questioning from Sen. Tom Cotton (R-Ark.), he reaffirmed that he had personally been “supportive of a conditions-based drawdown, conditioned most prominently on a peace agreement between the Afghan government and the Taliban.”

He conceded that Biden’s decision did not align with that stance.

“Once you were confirmed, um, did you express a personal opinion similar to what this committee has heard from Secretary [of Defense Lloyd] Austin and Generals Miller [former U.S. commander in Afghanistan], McKenzie and Milley, that we should maintain a small residual troop presence in Afghanistan?” Cotton asked.

“Well, by the time I came into office the debate had moved on. The president had made his decision and we were executing on that decision,” Kahl replied.

Pressed by Cotton, he added, “My personal position never changed, but by the time I came into office the president had made his decision and we were moving on, on that decision.”