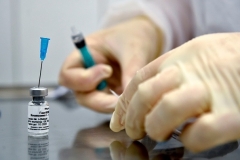 A nurse prepares to inoculate a patient with the Russian coronavirus vaccine known as Sputnik V, which has yet to be approved for use by the World Health Organization. (Photo by Natalia Kolesnikova/AFP via Getty Images)

(CNSNews.com) – The new international travel rules outlined by the Biden administration could have an oversized impact on prospective visitors from Russia, where the only Moscow-approved COVID-19 vaccines are not among those required for any non-U.S. citizen wishing to visit the United States.

The new vaccination-based international travel system, which will come into effect on November 8, requires all non-U.S. citizens who are not immigrants to be full vaccinated and to provide proof of that status – in digital or paper form – to the airline before flying.

But the only vaccines that will be acceptable are those that have been approved or authorized by the U.S. Food and Drug Administration or the World Health Organization (WHO).

The FDA has approved three COVID-19 vaccines – those manufactured by Pfizer/BioNTech, Moderna, and Janssen (Johnson & Johnson).

Russia has registered four vaccines, all Russian-made, and none of them falling within the new U.S. rules. They are Sputnik V, Sputnik Lite, EpiVacCorona, and KoviVac.

Sputnik V was the first COVID-19 vaccine to be approved by any government authority – in August 2020 – but the manufacturer’s application for WHO approval has been plagued by concerns about cross-contamination, data integrity, and other issues.

Ingredients to produce the Russian COVID-19 vaccine Sputnik V arrive in Buenos Aires in June. Argentina was the first Latin American country to authorize the use of the Russian vaccine and to localize production. (Photo by Juan Mabromata/AFP via Getty Images)

The E.U.’s European Medicines Agency has also been considering Sputnik V’s application for approval since last March, but has yet to make a decision.

Apart from the 48 million Russians who have received one of the Russian-registered vaccines to date, many millions more citizens of other countries have also received a Russian-made vaccine: Despite non-approval by the WHO, Sputnik V has been approved for use by the governments of 71 other mostly developing countries, and Sputnik Lite (a single-shot vaccine) by those in 17 countries.

One of two senior administration officials briefing on background was asked whether the U.S. would consider expanding the regulations to include some of the vaccines not approved by the FDA or WHO, with a reporter noting that “obviously, there are hundreds of millions of people in places like India and Russia and elsewhere that have been vaccinated with other vaccines not on the list.”

“We’ve picked the U.S. FDA list and the WHO list because they go through an internationally recognized standardization process that’s easy to define,” the official said.

“Some of the vaccines you mentioned are going to be under review [by WHO and its Strategic Advisory Group of Experts] as the data on performance of those vaccines becomes available in a regulatory process.”

The new travel rules announced on Monday include some narrow exceptions to the vaccination requirement. Anyone under age18 will not have to show proof of vaccination, but will have to show a negative COVID-19 test result before boarding a flight.

That’s because many countries, even some with high vaccination rates, do not yet allow children to be vaccinated. (China is an exception, approving vaccinations for children aged 3-17.)

Even in countries where teenagers are eligible for vaccination, they are often further down the list as vaccine stocks are limited and older and more vulnerable groups are prioritized.

Also exempt will be travelers with certain medical conditions and those who have had “severe anaphylactic allergic reactions to a prior COVID vaccine,” the official said.

Finally, the vaccination requirement in the new regulations will be waived in the case of certain visitors – not tourists – from countries where vaccination levels are below ten percent due to low vaccine availability.

The senior administration official said around 50 countries would currently fall below that threshold.

The official emphasized that the exemption would not apply to people from such countries wanting to travel to the U.S. on tourist visas. “They need to have a specific, compelling reason” to visit.

Global data show that dozens of countries have fully vaccinated rates way below ten percent. Among the lowest are the Democratic Republic of Congo (less than 0.1 percent), Yemen (0.1 percent), and Haiti, Chad, and Central African Republic (0.2 percent each).

In addition to the vaccination rules, all passengers traveling to the U.S. from November 8, regardless of citizenship, will also have to show before departing a negative COVID-19 test taken within three days prior to boarding.

In the case of unvaccinated passengers, whether U.S. citizens and lawful permanent residents, or others who fall within the narrow exceptions, a test with a negative result will have to be taken within one day of flying to the United States. Children aged under two will not need to have a test.

The third leg of the regulations relates to contact information. Passengers will have to provide airlines with valid contact details before boarding, to facilitate rapid contact tracing when needed.

“The best way to slow the spread of COVID-19 and the emergence of new variants is to act quickly to reduce the spread of infection through vaccination, layered with the additional mitigation measures – including vaccination for everyone who is eligible – and timely and effective case detection through testing, contact tracing, public health follow-up for all international travelers,” the official said.