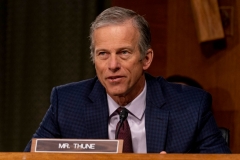 As CNSNews.com previously reported, Biden told a CNN town hall last week, “I guess I should go down, but the whole point of it is, I haven’t had a whole hell of a lot of time to get down.”

At a Capitol Hill press conference, Thune said that Republicans are talking about increases in energy prices, which will “worsened by the Democrats’ tax and spending spree.”

“The president wants a deal on some so-called Green New Deal before he goes to Glasgow, Scotland, and I think the only thing the American people are worried about is not what’s happening in Glasgow but what’s happening to gas prices,” he said. “If you look at heating fuel, if you look at just filling up your vehicle at the pump, cooking anything like that, energy prices are starting to go through the roof.”

The senator warned that home heating prices could climb as high as 100 percent in his state.

The expectation, prediction is in my state of South Dakota that this year we’re going to see energy prices for home heating go up anywhere from 50 to 100 percent, and so the president’s obsession and preoccupation with going and schmoozing with people in Glasgow, Scotland to talk about Green New Deal is I think completely lost on the American people who are caring more, a lot more about the prices that they’re paying to heat their homes.

It is I think remarkable that the president finds time to go to Glasgow, when he can’t find time to go to the border, so we have a historic number of people coming across the border.

In fact, at the end of this calendar year, the prediction is it will be, would have been 2 million people will have come cross the border illegally this year, biggest number ever in history, and fewest number of people being apprehended and caught illegally at the border.

So I guess what I would say to the administration is it’s not enough to Glasgow, Scotland. I think it’s important to go to the border, and having a roundtable a thousand miles away isn’t going to cut it.

You need to get down there, see the conditions that our Border Patrol agents are dealing with and understand the sense of urgency that surrounds what’s happening at our border, the humanitarian and national security crisis it has become due to their bad policies.